I haven't scanned any of these cards from today but I got a boat load of 1972 Topps Baseball from sportlots.com and a couple of 1974 Football Cards from Ebay.

1972 Topps Some of these are off center.

192 Cubs Team Card - A couple of times in the 1970s it seemed that only the Cubs did this cut-out heads team thing on the team cards. I think I had a poster of this once as a kid, not 100% sure such a product existed let alone if I actually had it.

The 1972 Topps Baseball is the ultimate in 1970s design style, here are a couple of examples of the styling. The following cards I already had, I had forgotten that I had scanned the second two.

One of my fave Old-Time Players Frank Howard, began his career with the Los Angeles Dodgers but is most remembered as a Washington Senator (They then became the Texas Rangers and the 1972 is the Debut of the Texas Rangers on Cards) 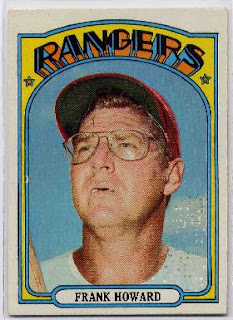 Even though Tug McGraw played on two teams I'm not very big on. The Phillies and The Mets (Since some trades of some Nationals to the Mets I am more appreciative of them) If you are old enough to remember the 1970s you may remember Tugs comic strip based on his MLB career "Scroogie". The main character played for a team call the PETS. Somewhere I have a Scroogie book and a couple of comic strip clippings when I find them I'll try to remember to scan them. 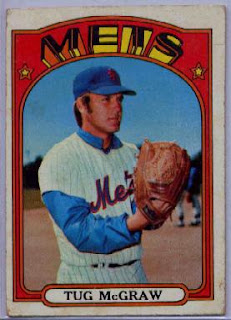 Just because he is the Home Run King Here is Hammerin' Hank IN ACTION. 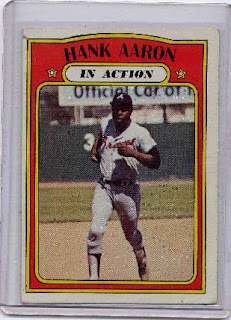 Now the Football Cards I got: 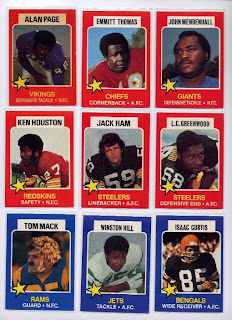 Back in the day one of the biggest food companies and Topps produced some nice card sets that were included in the food product. I am talking about WONDER BREAD. In 1974 -76 they made some nice, although small, Football sets.

I will concentrate this post on the 1975 set as that was the only one I had any cards of way back then. My mom wasn't much of a fan of the bleached white Wonder bread so we would usually get either the store brand or Whole Wheat breads when I was a kid. So it was sort of rare when I would get some of these things. Wonder Bread also did some non-sport sets the most popular would probably be the STAR WARS and maybe the BATTLESTAR GALACTICA (The original series) sets. (I'll try to post some pics of those sometime later, I don't think I have any scanned).

OK so way back in '75 I managed to get these two cards from this 24 card set: 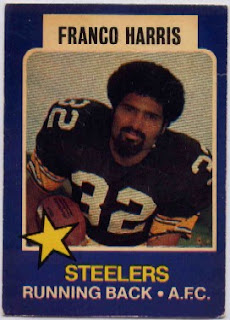 Those two cards were pulled directly from the product, the only way to get these cards back then. A few years later when trading card shops started popping up during the hobby boom of the early 1980s it was possible to start getting these from other sorces and even some of the factory sets. So my copies of these cards are pretty yellowed on the back and the white parts on the front from being in actual contact with the bread. I forget if they put them in those little plastic packs back then or not. Even if they did cards pulled directly from the bread bags are most likely never going to be anywhere near NM.

For the longest time those were the only two cards from this set that I had. It also seemed that I would be forever doomed to only having just those two, um this was before the internet and places like Ebay where now if you are patient enough you can find a decent set for a pretty good price, but I had to do things the hard way and find the set in bits and pieces So I do have a few cards from this set for trade (I'll list those toward the bottom of this post). OK so I pieced the set together mostly by winning some Ebay auctions, and I think maybe one or two purchases from sportlots.com (either in the direct stock, or in the 1,2,3 Auctions they have).

Here are a few of my fave cards from this set: 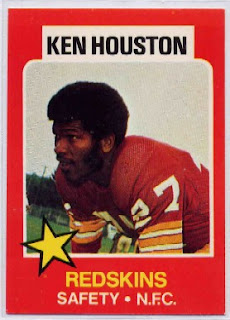 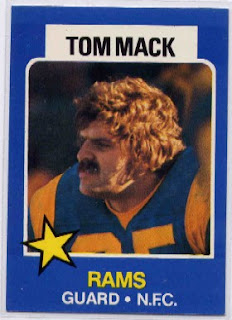 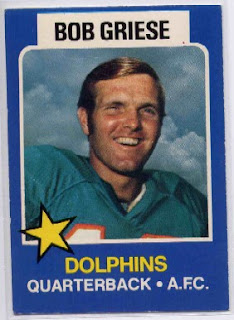 The Bob Griese card was not too difficult to get with today's internet. I got it from Ebay and the seller appologized for it being in such poor condition. When I got it I was like "What's wrong?" OK so the corners are not prestine sharp and the edges have a tiny bit of wear, but that doesn't make me sad about it.

Now the cards that eluded me the most and I had Dicken's of a time trying to pin down. They were cards #15 Chuck Forman and the first card #1 Alan Page. Since they both are Vikings maybe it was an ancient Viking curse I was a victim of. I would keep finding partial sets, that had almost everyone but these two, especially Mr. Page. He was the very last card I managed to find. Odd as often people manage to get the first card of a set or some of the early ones and decide to acquire them in order. Anyway it took about 34 years to complete this 24 card set, with probably only about 10 years of actually trying hard to find the cards other than in passing. 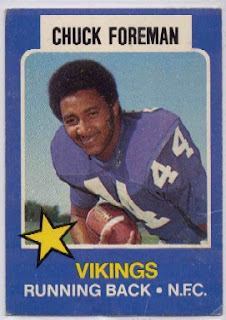 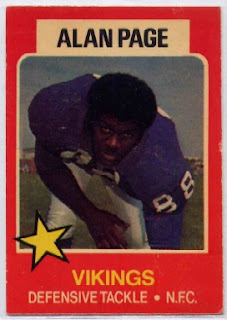 One thing about the design of this set that for several years I couldn't place since I only had the two cards was how they were organized. I haven't quite figured out the reason for the numbering but I eventually discovered the pattern to the RED and BLUE borders. At first I thought it may be the traditional AFC/NFC thing, but after getting more cards from teams of the same conference with different color schemes I knew that wasn't it. It isn't by team either as there are a couple of teams that have 2 players as you can see there are two Vikings and one is Red the other Blue. Well with the full set and studying the cards carefully, I discovered that The DEFENSE is RED and the OFFENSE is BLUE. Mystery Solved.

I do have a complete 1976 set. Over the years, now many of the players from each of these sets are now in the NFL Hall of Fame.


Here are my Duplicates from this set and also my lone duplicate from the 1976 set that are up for trade.