Once again I scored a homer, well at least some extra bases, on a high profile player for my Strive For '65 set build. I can now add "Hammerin" Hank Aaron (still the true Home Run King to many a fan) to my list of super players from '65 that I got for much less than expected or what some would say is average. Past "steals toward the set" include Yogi Berra and Harmon "Killer" Killebrew. There are still a few other big names out there that I hope to get for much less such as Mickey Mantle and fellow Yankee Roger Maris.

Hank here I got from Ebay for a bit more than Yogi and Harmon combined before the shipping (after shipping the duo is a little more). Like a few other must haves for this set I sniped this one. I bid my highest of $20 ($20.75?) with 8 minutes to go, and won it for $17 w/ the Free Shipping. It was fortunate that I did aim for a bit higher because at first I was only going to go as high as $15 since within a day to go it had 6 bids at about $6.50. This roll of the dice came up lucky for me not all rolls are that nice. I could have easily spent over $20 for Mr. Aaron's '65 card. In fact I was watching one or two in pretty decent condition at $25 BIN. 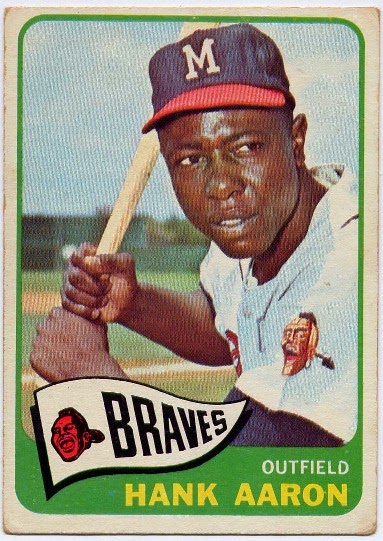 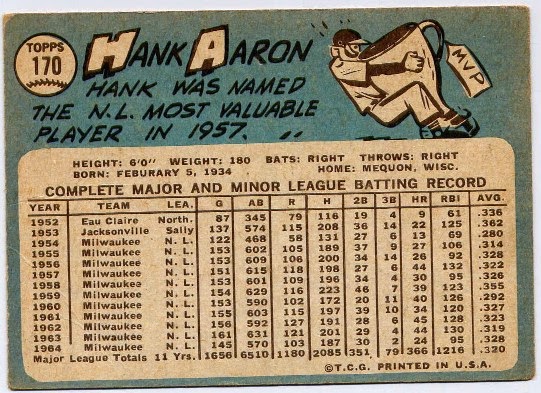 In my Ebay shopping I picked up a trio of A&G cards two USA Women's Soccer Champs and one Supernanny? I've been meaning to pick up some USA Women's Soccer cards for ages and ages now. So What did I get? From one dealer I got 3 cards at BIN prices shipping was $2.49 combined. Individually shipping would be $2.49 each. I am so glad many sellers allow for combined shipping and you can "Ask seller for total" before you finish the checking out completely. OK so in reverse order of preference I got:

First I got the Supernanny Jo Frost. I'm not a reality TV lover in fact I usually shout and complain about the entire genre of reality TV, but it has been here for several years and looks to have a permanent hold in the universe of television. I eventually need to get the rest of the base set so it was a set need. 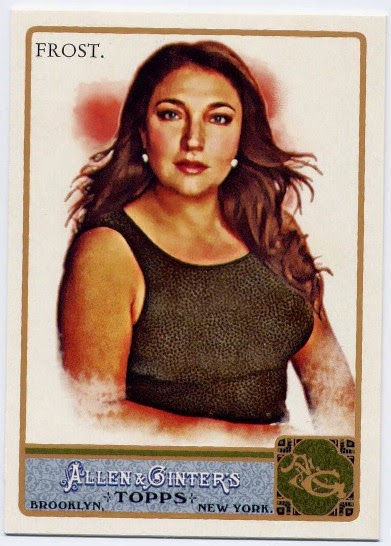 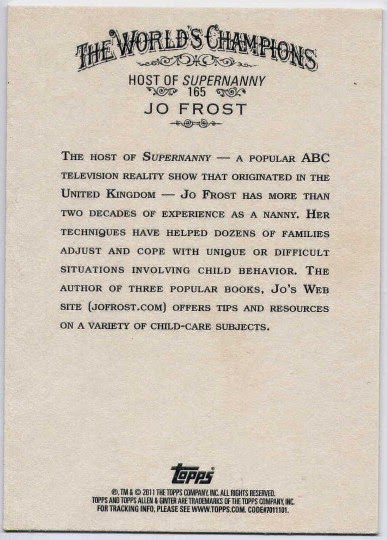 Next the first of two of America's Sweethearts of the Soccer Gridiron Brandi Chastain. What you don't remember her? Maybe if she takes off her jersey... 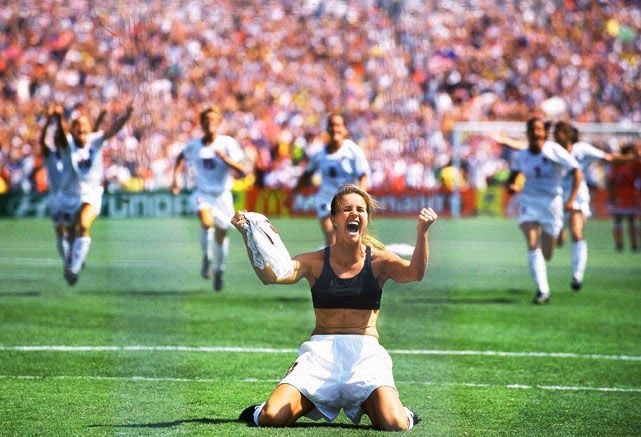 OK NOW you remember her! 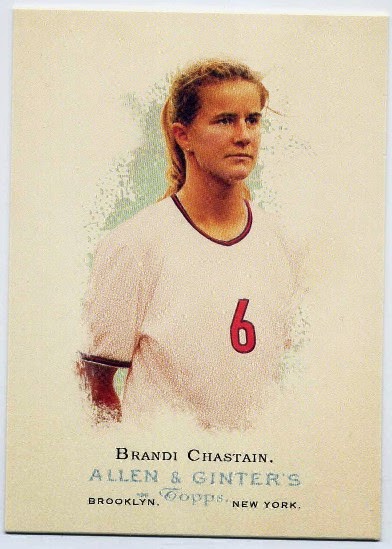 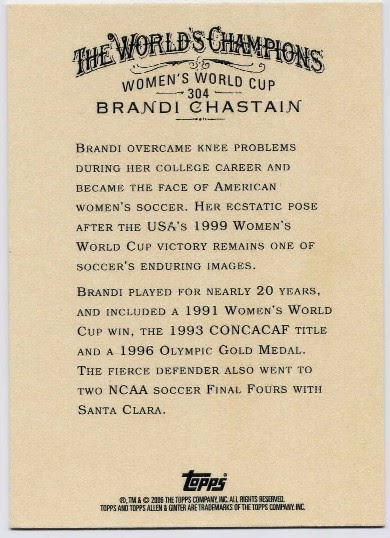 Third comes the sweetest sweetheart of the World Cup Champion USA team Mia Hamm. The poster girl for the team for several years. 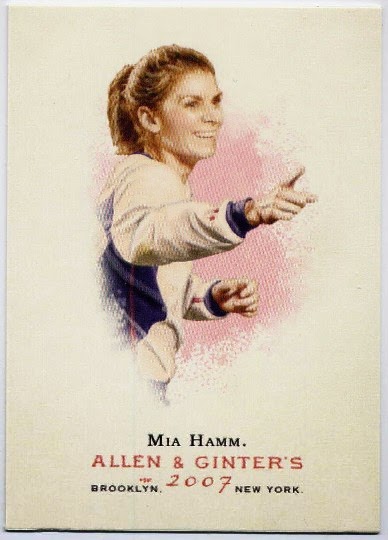 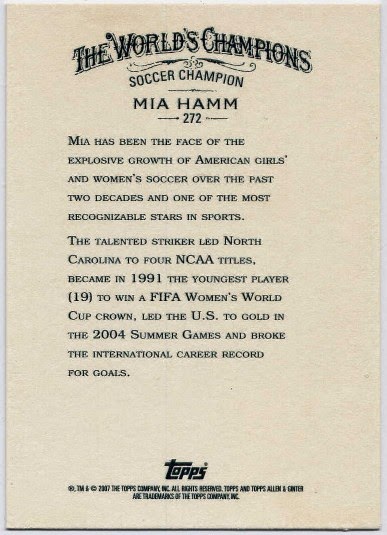 Strive For 65: Killer In Da House!

The latest card in the Strive For '65 Set build. Fished from The Bay on one bid for just $5.95 + $2.00 shipping card #400 Harmon "Killer" Killebrew Twins. I thought this would be one of the cards I would have to spend BIG bucks on. Fortunately I managed to find one of the lower priced ones in very good condition so what is there is some off-centering and a small stain of some kind. About 10 years ago I would probably have passed on this one for either of those two reasons. I also would have passed on it if the price were $10 or more with those flaws. Recent prices range from a one bid $1.75 (+$2.32 shipping) to a graded version that went for $125 (didn't check the shipping rate on that one) 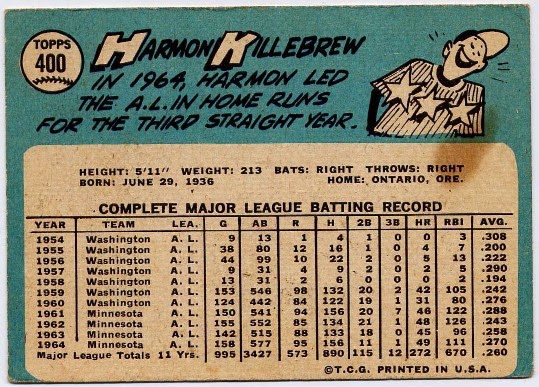 That brings the set build total up one to 162/599 (27.1%). This card fills one more slot in a page bringing that page total up to 2/9. Sadly I don't have a "joy of a complete page" yet on this set. The closest I have is a page with 7/9 those two cards I have in my cart over at sportlots with a bunch of other cards, only a few of which are '65s though. So far I have been playing small ball on this set, I need a couple of grand slams to reach my ultimate goal of having the set complete by Next April.
Posted by CaptKirk42 at 12:00 PM 3 comments: