Something Is Gonna Break.

OK I will be a bit mysterious for now. In a day or so I will bust open a box of cards I got recently. I will then post some scans of the box break; the box, a pack, a sample of a base card, some or all of the inserts and of course all the hits. I plan on doing a review of what it is and give a little backstory of how it came to be. Actually how I got my grubby little hands on it. I might just end up giving away all the cards, or at least a good portion of them.

Why the mystery? Why not? Seriously though it is mostly just to insure I get a December post or two in on this blog. Also being a bit mysterious with a planned future post tends to get more people to read a blog, or get them excited about it a little.

In the meantime here is An Alex Ovechkin card I haven't shown. I got it from a group box break. I don't recall exactly when, but I think it was one of the last hockey ones I was in earlier this year. I cut back on all the breaks I was participating in. Now-Days I am only in one Baseball break that is taking December off. I may or may not continue with that one. I like group breaks but it just gets too expensive to stay in them month after month, especially if you are in more than just one or two. Plus the groups tend to repeat some of the products they bust, or they bust stuff you really don't want, or they only bust the high end stuff and your team is rarely in the expensive 5 cards or less 1 pack boxes. I digress.

Notice this card is one of those plastic acetate "see through" cards. Well it looks like it's white but that is the background of my flatbed scanner, actually the padding on the underside of the scanner cover. I tend not to like this type of card, but this one has grown some on me. At least it isn't a die-cut one with weird angles and shapes. 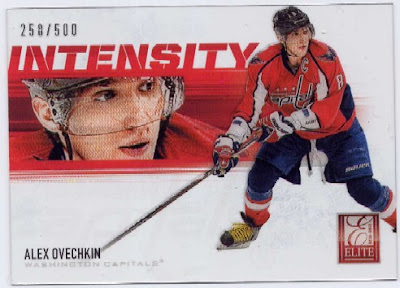 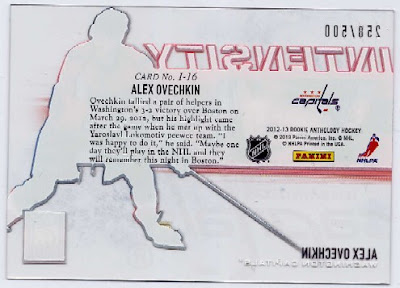