Remember when you were a little kid and you looked forward to getting the Sunday edition of the newspaper so you could read the full color comic section? Back the early 1950s comic strips were super popular more so it seems than they are now days with the Anime comics and graphic novels and computerized shows on the internet and on television. In 1953 a company called James O. Welch Co. produced a set of trading cards that were inserted into the Sugar Daddy candy wrappers. There were 50 cards in all. Each with a comic character from one of the popular comic strips of the day. The character name was not included instead there were a series of blank boxes, like a crossword puzzle, that collector's were encouraged to fill out the name. When you collected 25 different cards you were to send in the cards, filled out with your guesses of the character's names and you would win a giant sized Sugar Daddy lollipop candy on a stick.

Anyway you wanna see the cards. I have three cards with two different characters 2 from series 1 and 1 from series 2. Some months back I had mentioned these cards on the card forums where I mention my "mail days" so the description paragraphs I have more or less just copied from those posts to set up showing each of the cards, so there will be some repetitive information in this post.

On 05 June 2015 I got a lone card Non-Sport sweetie for $9.95 + $3.20 Shipping. A single nice condition 1953 R757-1 Comic Character Card "Sugar Daddy" series 29 The Dragon Lady from Terry And The Pirates. This was from a set of 50 cards where there are blank boxes that the collector was to fill in the blanks identifying the character and then after collecting 25 cards mailing the correctly identified cards in to the candy maker they would get a GIANT sized Sugar Daddy "lollipop". There is an identical second "series" R757-2 that has a "coupon" on the bottom of the card (similar to the tabs on the Red Man Tobacco cards). The coupon was for a beanie or set of beanie buttons. 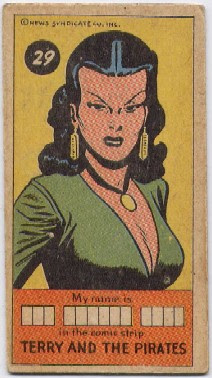 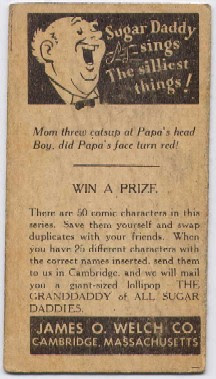 On Wednesday 01 July 2015: I had a one envelope one card mail day. From Ebay for $24.99 + $3.00 shipping. Yeah I know the card was a bit expensive but I think worth it. a 1953 Sugar Daddy Comic Character Cards R757-2 #29 The Dragon Lady from Terry And The Pirates comic strip. A few weeks back I had gotten the other variant of this card the R757-1 variant for much cheaper. The first variant with the fill-in-the-blank for the name is slightly easier to find since it didn't have to be mutilated, this R757-2 variant the one with the coupon is sometimes difficult to find with the coupon intact and in such good shape as this one is in.

On 11 July 2015: From Ebay single package forget if it was a PWE or a small cardboard mailer. If I recall the contents (a single vintage non-sport card) was well protected by a cardboard sandwich and was in a penny sleeve. IN pursuit of my set build of the 1953 Sugar Daddy Comic Character Cards R757-1 (and -2 set) I got card #46 Indian Chief from the "Smitty" comic strip. The blanks are Unmarked of course as this is the way I am collecting this set. At first I was concerned that the card edges were TOO straight and it was "cut" but it seems to be the same size as my other card from this set. Oh the auction details it was a BIN purchase for $7.50 + $4.00 shipping. 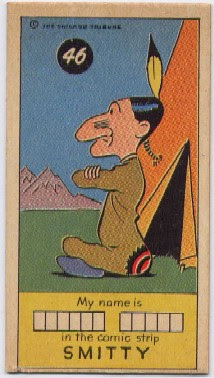 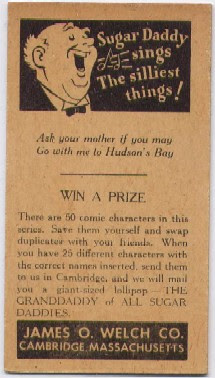 I plan on getting the rest of this set both variants eventually. The sets are nearly identical 50 cards in the individual sets so that is 100 cards total. The dash one set I'll try to get unmarked and the dash two set I want with the coupon intact so both sets will take me a while to get. As usual I want to get it on the cheap.