Here is the link to my last update from May. I thought I was getting better with updating this project, but seem to be running about the same every 5 or 6 months or so a handful of new cards. At this rate I won't even be 3/4 finished by the 75th Anniversary. The next milestone though is the half way mark. Any bets on if I'll make that in the next 2 months? I really wanted to get this posted last week (Sat 13 Oct), but barely got the cards scanned then. Now I will barely get it out on this Saturday. On with the cards.

I got 5 cards from the 1965 set from a Sportlots auction for $2.25 plus shipping $1.99 I knew from the start that a couple were duplicates, but I need the rest and the needs outnumbered the haves. 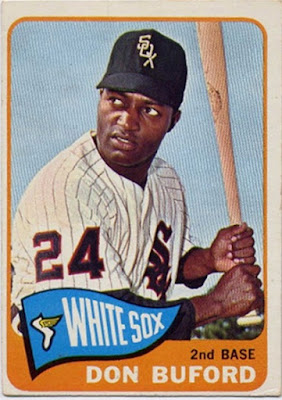 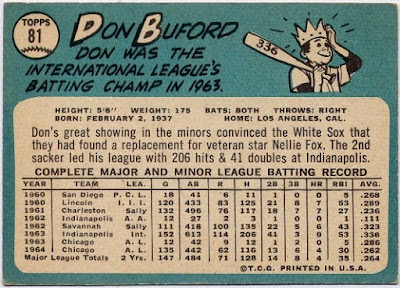 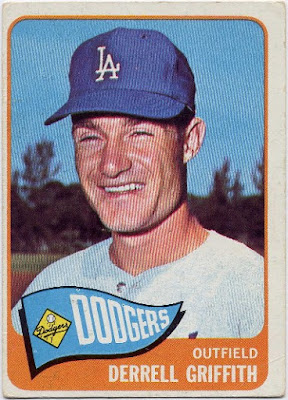 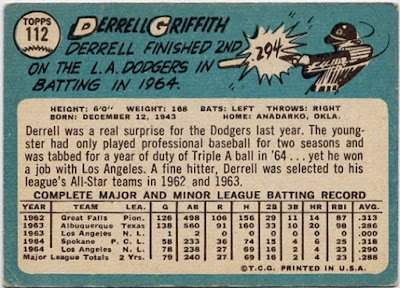 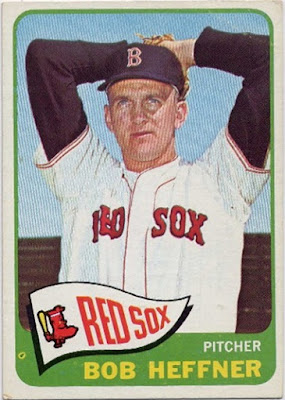 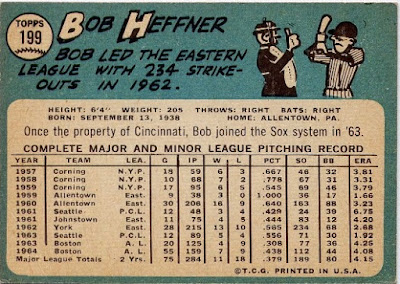 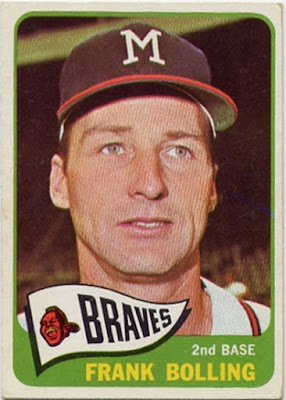 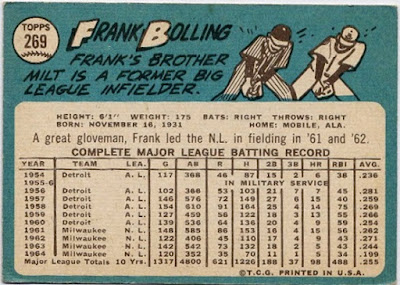 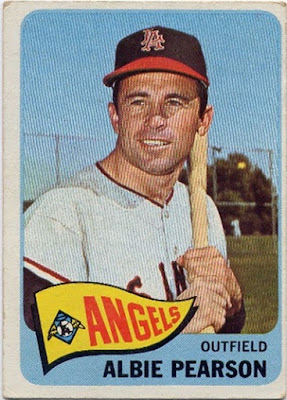 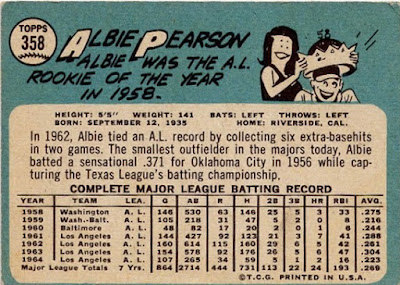 Yes the bottom edge on the back of the Albie Pearson card is off-center there is just a little blue on the bottom. Eek I actually did crop a little too much as well, but not a whole lot. 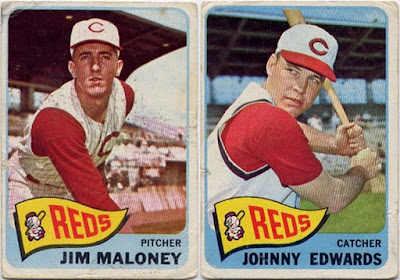 One Sportlots Auction 2 card lot one team $1.25 plus 99¢ shipping. Both cards were needed. 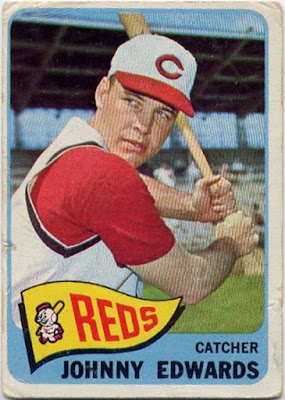 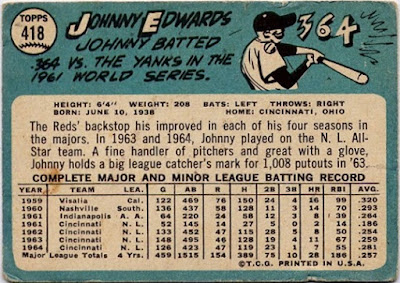 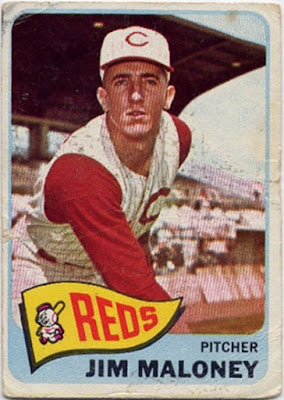 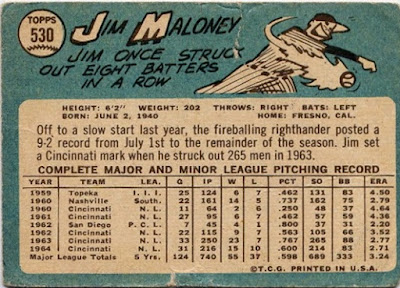 Washington Wednesday: By The Classic Numbers

When I first noticed this pair of cards on Ebay I was a little leery of their authenticity. What with the odds of one seller "pulling" these specific numbers from a pack and the sellers other auctions for cards with some of the more sought after serial numbers. D'oh OK so one of the special things about the cards I purchased were they are serial numbered. Another thing that chased the warm fuzzies away was the auction title calling them 1/1s. This seller has a bunch of listings using the 1/1 keyword. Even though the auction title also had the actual serial numbers shown it was titled as a "1/1 lot" indicating each card in the lot is a 1/1. OK semantics I guess. Even with the red flags and warnings going off I decided to grab this pair before anyone else did. 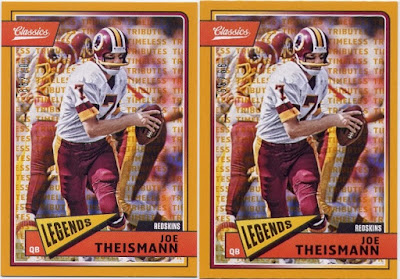 The pair of cards I got are these 2018 Panini Classics Football: Timeless Tributes Gold 188 Joe Theismann Redskins #d 07/99 and 99/99 from Ebay for $14.99 Free Shipping. Like I said the seller titled the auction using their serial numbers and using the old "Ebay One of One" labeling trick. The serial number is on the front hard to see left hand side under the "Classics" logo near the top. 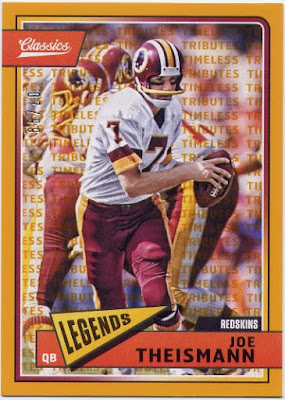 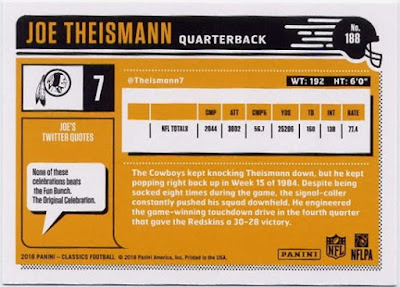 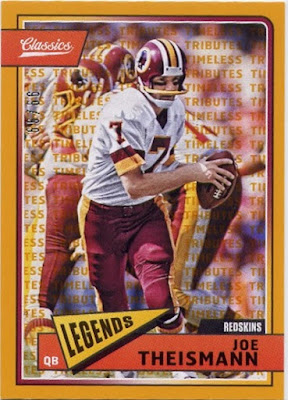 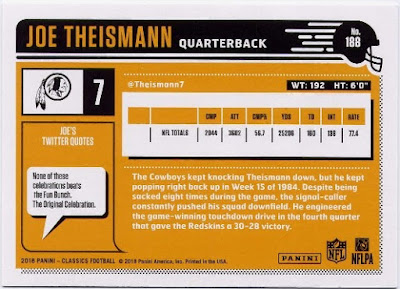 The dealer also sent these 5 Chiefs cards as a bonus. ?Redskins and Chiefs? Guess it is an Alex Smith connection, or the Indians Connection, or the seller just got confused and thought they were all the same team.

That one is vintage so it is a keeper by default. 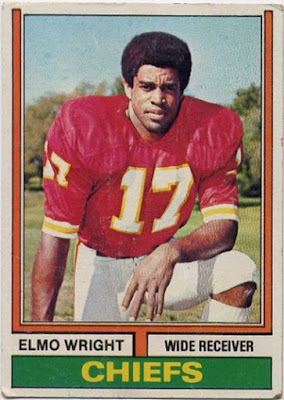 Then we have a card from the "Wave of the Future" insert set of 6 cards to the 1994 Fleer Flair Football set. I was going to toss this into the tradebait pile but in checking the player's team history saw he played for the St. Louis Rams in 1998 so it is a keeper. 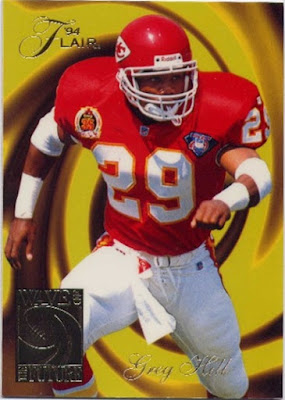 Next up one of those annoying "two sided" cards that is a card with two players sharing the card one player on each side. Confusing the collector as to which face is the "front". Not really since this is a serial numbered insert and at the time the serial numbers were put on the back of the card, but that practice varies from company to company and from set to set it seems. I don't normally like this kind of card so again it is one of these was going to toss in the tradebait pile card but one of the players was a Redskin in 2001. The "front" player Donnell Bennett. 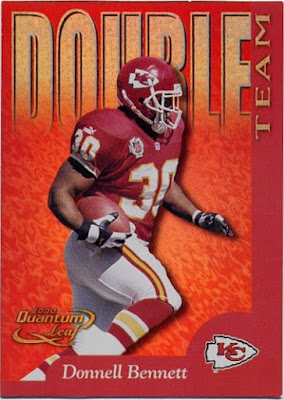 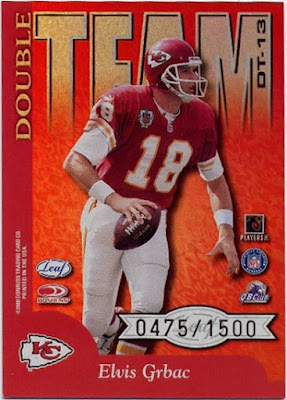 The final two cards are tradebait and technically are the "same" card. You can't tell from the scans since they are separate scans but one is the mini variant of the other. 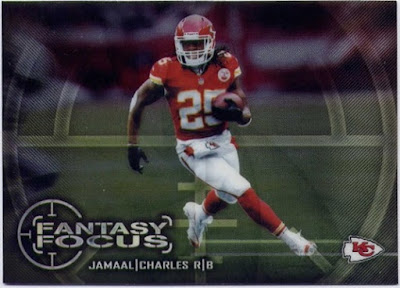 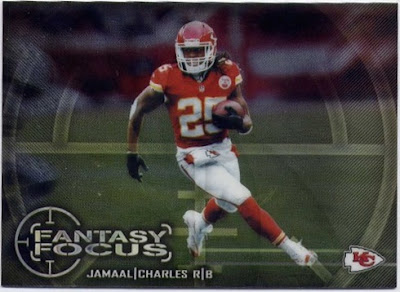 Out of five cards I originally didn't want to keep I am keeping 3 of them for now. The vintage one will be added to my 1974 set build (if I don't already have it). The other two "keepers" are just keepers for right now.
Posted by CaptKirk42 at 12:00 PM 1 comment: