Blog Bat-Around: The Cards I Used To Own

This post is in response to the Blog Bat-Around question that was posed over at The Garvey Cey Russell Lopes Blog better known as GCRL some weeks ago. Regular readers of This Blog will know I tend to NOT follow the blogging trends and tend to ignore or avoid them. As a result my blog is not on the top lists of must reads and not even on some collectors RADAR. However, every once in a while a trend comes along that I can't resist.

The Question in Question:
What cards have you owned that you regret are no longer in your collection?

First some generalities: Over the years there have been many cards I've gotten rid of through trading, selling or in my childhood just plain getting rid of or having the dreaded "Cards My Mom Threw Out" happen. That happened to my oldest brother. For me many cards fell into the void that was our messy/hoard-like laundry/utility/storage room in the basement of the house I grew up in. Some of those I recovered over the years, others were probably lost in floods caused by backed up clothes washer, stolen by inter dimensional space aliens to fuel their time machines or left in the bottom of a box that got filled up with giveaway/donation stuff.

I recall a really stupid time in my childhood in the early 1970s when I did a huge purge of my collection that involved a large trash bag. I had gotten rid of many terribly hand-cut Hostess cards and similar type cards you had to cut from boxes and a bunch of dupes or cards from teams I hated at the time. I just tossed them out with many 1970 and maybe '71 Topps Baseball in the mix. This was years before recycling hit my area or neighborhood. I don't think there would have been anything really valuable. I have a vivid image memory of that dark green or maybe even black plastic trash bag and a bunch of poor 1970 baseball cards, maybe even some football mixed in. It is like seeing one of those gut wrenching pictures from The Holocaust of a huge pile of naked corpses. Needless to say I haven't done any other huge purges like that since. I didn't keep inventory totals back then so the exact total will forever be unknown. I just know it couldn't have been a huge number as I didn't have all that many cards back then to begin with. During this purge time I think I had gotten rid of many of my cards I had initialed with either red ball point pen or black magic marker with my initial "K" very large usually on the back sometimes on the front. I need to pull out some of the survivors and scan them and post about them sometime. I have been meaning to do a post like that for sometime.  I also recall a much earlier and equally stupid time of cutting up cards for team logos and helmets or caps to put into scrapbooks. Yeah those scrapbooks have been long gone.

There were a few times in the later 1970s (circa 1977/8) when I played a "flipping" game with a friend of mine (who introduced me to what would become my LCS shortly after it opened). He was much better at the game. I suspect that he sometimes cheated and I wasn't catching him (or too shy to call him out on it, the few times I tried arguing about a score or flip of his I lost). I recall many 1975 Baseball cards exiting my collection that way along with 1970s-72s and a checklist or two, even some non-sport when the baseball and football ran out.

Then when I was discovering the world of online trading in 2007 and got involved in some of those team trading groups, where you send a batch of a specific team to that team's collector and they send you your team (many bloggers trade this way). Those groups are fun but I did trade away some cards from a few sets I am now trying to complete. I used to just put cards into those packages willy nilly. I recall a lot of 1981-83 Donruss, Topps and Fleer going into those packages. I might have unintentionally sent some valuable early to pre junk years Rookies then.

I was also going to tell of a card that at one time answered this question, but over the years I have since replaced the original copy of the card. Since it doesn't really qualify as a card I used to own, it will appear in a later post sometime soon and will reference this post. The card returned and the regret is gone.

Now onto the cards that really answer the question:

Shortly after discovering COMC (Check Out My Cards now Check Out My Cards, Comics & Collectibles) in early 2009 I sent 215 cards to them to sell. I've only sold 40some there. Yeah most of them are THAT common. This one was my second card that sold there and at $8 is tied for being the highest priced card I've sold there. I had gotten it from a group box break. It wasn't my first GU card (that was a football GU of a whozit Ram) but maybe one of my first multicolored GUs. It is a very beautiful card. 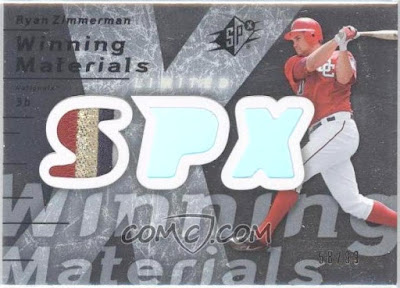 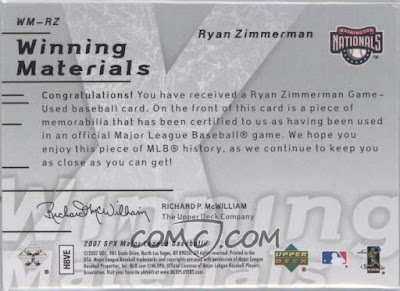 Yes it is a 4 FOUR COLOR swatch card. The piece is an excellent high quality swatch from the jersey trim or maybe the pants side stripe trim. It is game used, a concept I am very against and try to avoid. Admittedly I have other jersey and relic cards I am currently keeping that are just as nice looking or better looking that I have no plans on selling or getting rid of anytime soon.

Thanks to Joe at The Shlabotnik Report with his Wacky Packages Blog Bat-Around post I was reminded of one of my first trading card regrets that I haven't recovered from. It was an original 1970s Wacky Packages Series 5 set (circa 1974). I left a semi-brief comment about this on Joe's blog, but I will expand upon it here. As did Joe and many other kids at the time I affixed a lot of Wacky Packages to my loose leaf school binders and spiral notebooks and even the paper bag book covers, clipboards, whatever else I thought of. I regret each and every one of those, even though it started with just duplicates. I have some non-sport binders that were regular photo albums I have taped duplicate non-sport cards and stuck stickers to for holding some of my collection of non-sport stuff. Hmm that might be another post sometime if I think about it. 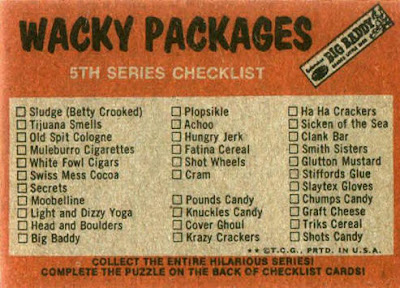 Elementary school back in the 1970s during I think 3rd grade a school friend/chum of mine circa spring 1974 had bought a full box of Wacky Packages Series 5 from a local News Stand general store. All my school "chums" back then were "friends" even if they were just acquaintances. He had a duplicate set for sale. Back then a box of those things cranked out 2 or 3 full sets. NO inserts or dang parallels to worry about. I think my friend got the box for only about $20 but kids rarely bought cards or stickers by the box, this was the first time I heard of doing that I never thought the stores sold them by the box. This was a few years before I would discover a brand new LCS (that is another story). I forget how much he had sold the set to me $5 or $10 maybe? Well the rest of the class, especially the boys soon found out I had all these Wacky Packages and I was persuaded to sell some of them to the others for like a quarter or two. I really didn't want to sell them, but I caved in and did. I may have even sold some of the puzzle piece checklists as well, but that is beside the point. I think I managed to bring home maybe 5 of the remaining stickers of the 32 sticker set. I'm fairly certain it was Series 5 (or maybe 7) as I recognize that I had all or most of that set (those sets) and the puzzle. I have got to complete all the Original Wacky Packages Sets w/ their checklist puzzles. I have a couple complete puzzles but I don't think any full sets right now. 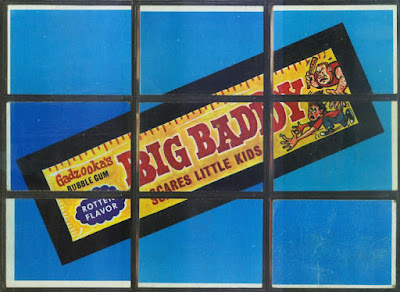 Next a semi-regret I am kind of mixed on. It was around 2008/9 I sold an unopened box of 1991 Upper Deck Comic Ball 2 Baseball (36 packs/ 12 cards per pack) on Ebay for $20. I think it was for $20 it might have been for as low as $10. That was all I had from that particular series.This series had Nolan Ryan and Reggie Jackson with the Looney Tunes Characters I didn't think it looked as good as the Series one which had just the Cartoon Characters. Still I might try getting just the base set sometime.

I have a lot of Series 1 of Comic Ball dupes from 1990 as I super actively tried to complete that set. I got pretty far but there were some cards the eluded me for sometime. Then I found the album sets (3 albums with the full set of series 1 cards) for pretty cheap and got those. I also have the hologram cards chase set of 9 cards I forget if I built that or bought it as a set. I think the latter. A few times I had thought about selling the albums and the hologram set as a full set but haven't. Sort of glad I'm holding on to those. The dupes I need to eventually get rid of.

More recently another sort of semi-regret. It was a relic card I'm not too keen on relic cards but this one was one of those bizarre rare ones plus it was of an Expos player. I just gave it yes gave it to another blogger who is a super collector of the player. 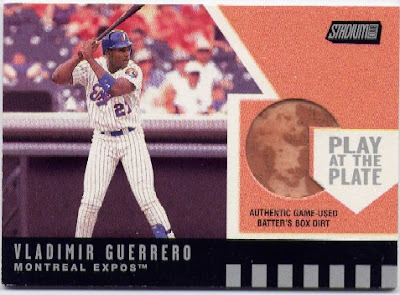 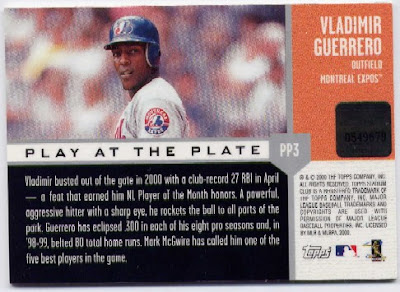 Yep game used BATTER'S BOX DIRT. Um OK I guess but which stadium? The back of the card doesn't even mention that the card is a special relic card so no knowing which stadium it came from unless you do a soil analysis of the dirt inside. My semi regret is that I am more of an Expos collector now than I was when I gave the card away. It was around the time I got rid of this card that I decided to continue to collect Expos cards since they are the Washington Nationals Franchise History. Before then I was internal debating on whether to consider Expos cards part of my PC collecting and not just part of my base set collecting.

To have fun with a Tom Lehrer Song: These are the only ones of which the regrets have got me bothered, And there may be many others but they have been uncovered.

A small listing of Blog Bat-Around The Cards I Used To Own Posts from around the Blogiverse: You can find these in the comment section of the original GCRL post plus some comment stories and newer postings that appear there after I have published this post.