When I was a kid I used to pronounce the word niche as "Nitch" since I had never seen the word written and had only heard a mispronunciation of the word.  I associated it with a similar word "Nook" as in a book nook. Personally I think the nitch mispronunciation sounds better for the physical divots when referring to the word's noun usage as a "shallow recess" like a nook. When referring to the adjective use of the word's "small specialized appeal" the real pronunciation of "neeesh" is preferred especially with trading card PCs. OH maybe it was being pronounced as "niissh" and I heard a T.

When it comes to collecting cards there are many collectors who have niche sub-collections in their PC, or they may concentrate only on their niche. There are as many niche categories as there are collectors. Just as there are team collectors and player collectors there are odd ball collectors, perhaps that is the biggest type of "niche" collection? There are collectors who niche collect their local college, or their college Alma mater, players from their hometown or state, players from a specific country, players with the same first name, last name, birthday, birth month, birth year. Cards that show their sport's championship trophy, players chewing bubble gum (or chewing tobacco), players not wearing a cap or uniform, players in a different sport uniform, Baseball players with a gigantic glove, Baseball players with two or more bats, players holding a ball, Well you get the idea.

For many years I didn't have what I would call any niche PCs. Sure I PC'd my homie DC and Baltimore teams and many many too many players I liked. For the most part I still collect those same players and a bunch more. I have always been into some of the "odd ball" cards of various kinds. It wasn't until recent years after seeing several bloggers talk about their niche PCs that got me into the more obscure or finer detailed niche collections. I forget who the first blogger was that coined the "niche" category but at first I thought some of the categories were very silly even some of the categories I now collect myself. At one time I tried to niche PC players from the general DC area (including Maryland and Virginia Suburbs) but that is too large a scope for a niche PC, I now limit the local "homie" players (from my home area) mostly to those who attended The University of Maryland or are originally from Silver Spring Specifically.

Other than My Homie Teams (DC and Baltimore teams) and Players I PC my niche collections include: My birthday 04 April, Players from the University of Maryland (preferably in a Terps Uniform), mascots, players with similar names to myself both first and last name. Sometimes it opens the scope of the niche up a bit too much. It also opens up my collection to other sports and more odd ball things.

So this post is labeled as the first episode of a series of "Niche PC" cards.

The FIRST card for this post I got from Sportlots from an auction in their "other cards" section since it is of a sport that is not in the Big Four of Baseball, Football, Hockey and Basketball. As it is a Tennis card, yes Tennis I'm not into that sport (even though I love the women's short short short skirts) but this is a niche card so specific sport be damned.

This tennis star has my first name incorporated into her last name. Jessica Kirkland.. So it falls into the Kirk Name Niche Collection. 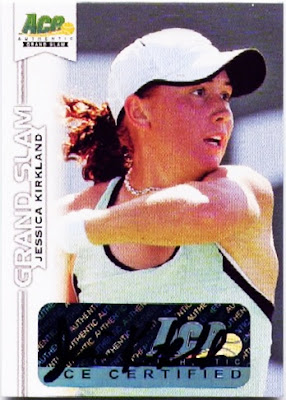 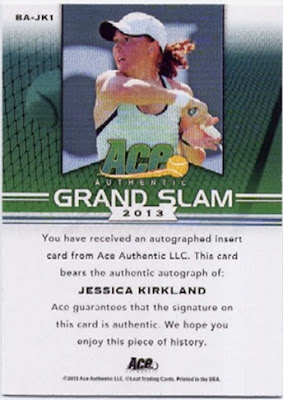 I got the card for the opening bid of 25¢ + $3.39 shipping. It was one of three packages or PWEs that arrived on my Birthday (04 April). This particular PWE or rather PYE (Yellow/Mustard/Gold instead of plain white) came from Ontario, Canada with a cute little stamp. 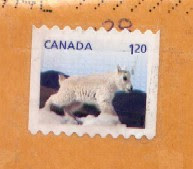 On a side note I do find Miss Kirkland attractive. Now now maybe its just the little white short skirt. Since starting the draft for this post I have added another Jessica Kirkland card to my Name Niche PC 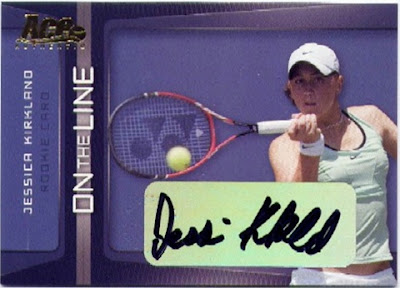 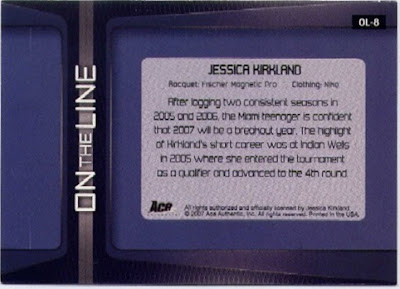 This one came from Ebay for $5.99 Free Shipping on the First of May. Not from Canada but from the Other Washington, Washington State. From Shoreline to be more specific (Approx 9 miles North of Downtown Seattle according to Wikipedia). Believe it or not the sticker is silver/chrome not lime green as it appears due to the reflective scanning. I'm not sure if my scanner has the ability to adjust light refraction, it might, I haven't really bothered changing many of the settings for fear of putting my ancient Epson Flatbed Scanner permanently out of alignment.

Man those Tennis card makers sure do love those silver/chrome stickers for the autographs. Of course I prefer real ON-CARD Autographs, but for the card makers the sticker-autos are more efficient. Topps and the other big boys mostly use clear stickers now, the silver ones are more often for higher end products. The On-Sticker Autographs or Stickergraphs as one blogger calls them. I forget who coined that one, or was it Labelgraphs?

As I said this is the first of a new post series that may or may not have any additional posts. I like the idea of a series of niche PC cards. My first draft of this post I had titled it "Name Niche PC 001: Some Tennis Lovin'" but that would mean I would have to start some other Niche PC series: Birthday Niche, U o MD Niche and maybe a few others.
Posted by CaptKirk42 at 12:00 PM 2 comments: