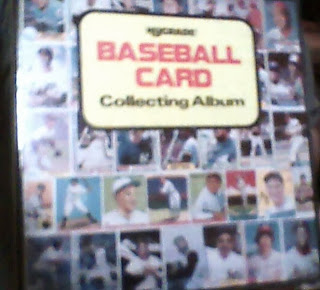 Note: There is also some contest on a blog about how you got started in collecting I'm not sure if these are related or not but for once I seem to be in the midst of some kind of blog trend while it is still kind of  a hot thing. Maybe both are done now, who knows?

I asked if I had to buy something, sell something, join something, download anything, test something, whatever something and the only requirement seemed to be to write about collecting in general and what it means to me. Then post it and maybe twitter tweet twit it to them. I'm not sure but it seems you don't even have to twitter it to them. At any rate, how about five and a half percent? Thank you George Carlin. It can often be difficult giving the whys and wherefores of my collecting, but I will attempt to do it here.

Lets see it all began a long time ago in a galaxy far far away... no wait... I was born a poor black child... nope...It was the best of times it was the worst of... that isn't it either. It was a dark and stormy night... Oh goodie some questions to shine some indirect light on my collection and help guide me at night, one if by land, two if by sea, three if by space, and four if by time. 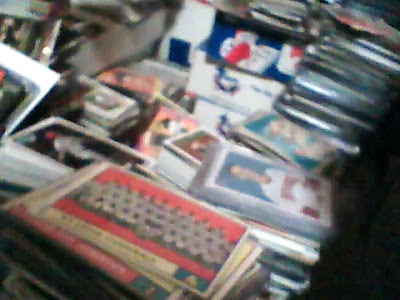 How long have you been collecting for?
Pretty much my entire life, but I have taken a short hiatus or two. I have older siblings who had started collecting things including trading cards so there have always been collections of something around me. My first card collecting memories were around when most of my first memories began at about age 5 (circa 1970). One of my brothers and I had matching hard plastic trading card "lockers". One was blue the other red they were about shoebox sized with two rows or columns and adjustable shelves. They were designed to look like gym lockers. The memory I recall is a trading session that I think included a 1970 Topps Fergie Jenkins for a 1968 Topps Willie Mays, or maybe for a 1965 Topps Ernie Banks. I don't recall if it was an actual trade or one of those temporary for the day only things ("no-keepsies"). It might not have even been those cards but those are some of the cards I still have from my childhood. I seem to think of those 3 cards my brother had all of them at one time, and I think the Jenkins was duplicated at one time. I don't recall how many times we traded I just have the one vague memory that included the lockers.

That thought also reminds me of how I would "identify" my cards from the cards my brother had that were the same or similar. I would use a red ball point pen, or a black magic marker (like a sharpie or its late 60s early 70s equivalent) and make a big "K" for "Kirk" on the front (red ink) or back (black magic marker). Other cards I would color in the cap or the cap logo front or back. The 1970 Topps Manager's cards were prime targets for that on the back, also the 1971 Topps back portraits got many a coloring of red. Some how Willie and Ernie escaped the marking, but poor Fergie got the big red K. I still have some of those cards I had marked, but the majority I had tossed away in a collection purge in the mid 70s I think. (see this post)

What do you look for in collectibles?
First the subject matter has to be something I'm interested in. For sports cards it is the sport and the team usually my Homie Washington/Baltimore Teams or a player I like. For non-sports it maybe a TV show or movie, actor or genre (like sci-fi or weird parody), or beautiful woman. Obviously I try to get the best condition I can afford or find, and overall quality as well. I will occasionally get some poor old cards that others ignore due to them being in such a poor condition. I am also a bit of a set collector so if a set design attracts my eye I want to go for the entire set. I have a ton of sets to build and complete. Getting a full set is more attainable for non-sport sets than sports sets. Unfortunately the card makers now-days make set collecting more a thing of the past. It seems to be player oriented now since it seems that each player has a thousand cards come out each year.

Where do you find most of your items?
Lately online usually for as cheap as I can get either through Ebay, or Sportlots. Sometimes trading or buying through the card forums or from other bloggers. When I was a kid you could find trading cards in grocery stores, convenience stores, pharmacies (aka: Drug Stores), news stands and toy stores. I am fortunate that there is also a local card shop near me (House of Cards) that I go to occasionally. I discovered it in the late 70s from a school chum of mine who took me there shortly after it had first opened in the back of a used book shop. It quickly became my homie card shop. Over the years they had expanded their space and moved a few times. For a while in the late 90s I thought they had closed for good but they had only moved across town. A few months back they moved and are now closer to me than they were from about 10 miles away to just about 4 but not as close as when I first discovered them about a mile and a half from home.

What is the centerpiece of your collection?
This is a difficult question for me to answer. I have so many cards, and memorabilia pieces I like for many reasons and many I have had for as long as I can remember. If pressured I'd probably have to go with either something Frank Howard, Sonny Jurgensen, Roman Gabriel, John Riggins, or most likely my 1965 Topps Baseball Ernie Banks card. 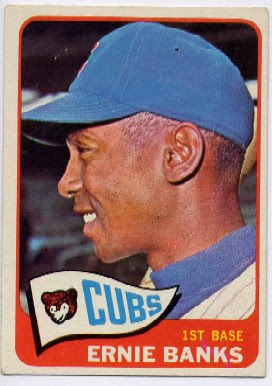 The 1965 Topps Baseball is a set I am desperately trying to complete. I wanted to have it done this past April since it is the 50th Anniversary of it, but I am only 1/3 of the way complete.

There is also my circa 1969/70 Frank Howard Team Issued portrait photo. 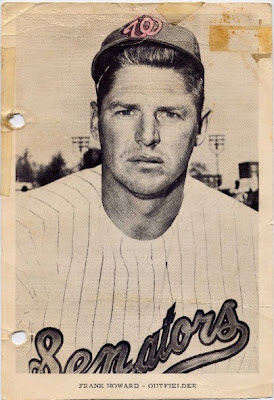 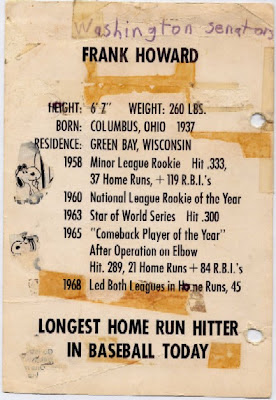 I know it isn't a "card" but it is part of my Washington Senators baseball/sports memorabilia collection. I'm looking for an upgrade to go with this sentimental favorite. Would also love to find the full team.