Quite awhile ago in the Blog Bat Around post I did, I was going to tell the tale of this card. However it no longer fit the criteria of a card I used to own since I have a copy that was acquired a few years back. I might even now have two copies, not 100% sure about that fact.

My story is from circa 1975 maybe '76 but '75 seems more likely. I was over at the house of a childhood friend who was a year older than me and lived just a few houses away. I think I might have done a little trading with him also that day I don't recall. The main event, the trade I regret (regretted for several years until I got a replacement) was with another boy. Before I mention the kid I traded with I'll talk about the trade.

It was an All Topps (remember this was mid-1970s there was little else around but Topps) football cards All Redskins trade and/or Ex-Redskins. Something like a five to one trade. To some collectors I may have gotten the better end of the trade since I got more cards, higher profile players and they all were roughly the same vintage but I didn't feel like it. It took some persuading for me to even make the trade. I remember some begging and pleading maybe some crocodile tears and the ante being raised by the addition of another card or two just for this one card. I think only 2 or 3 cards were in the mix to begin. In total I got 5 cards (I think) to the one card I traded, and at the time thought I would never see again. Remember this was the 1970s before the early 1980s Trading Card Boom and subsequent overproduced "junk" years. This was a few short years before my LCS would start from literally a "hole in the wall" (back corner room), and the Internet wasn't even a concept yet. It would be another 5 years or so before personal computers would become a reality.

I don't recall all 5 cards specifically but I do recall the first two:

(OK so he was Giants at the time. Notice he is playing the Skins on this card)
1974 Bill Brundige

Maybe also a current 1975 Redskin. I think it was in '75 but as I said it could have been '76. I don't recall the exact count but I'm fairly sure the Snead and Brundige were in the bunch The Snead was my first 1973 Topps Football card, or one of my first. It might have even been one of the "bonus" incentives to make the trade. Anyway I got a small poker hand of cards for just one card. This one: 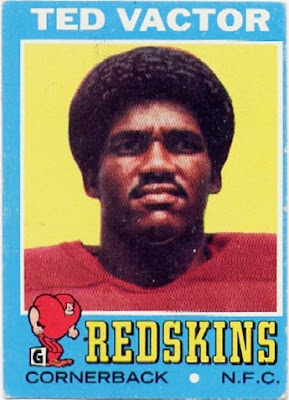 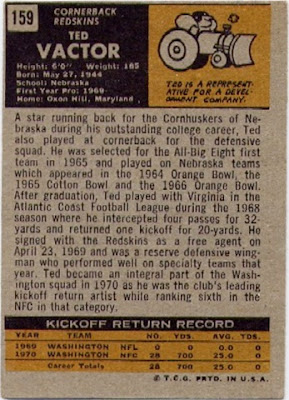 Yep The Rookie card and only card that Ted Vactor appeared on during his playing days, and probably even at all. It still appears to be his ONLY card. Oh and the kid I traded with? Ted's son Tori Vactor. Tori was super collecting as many copies of his father's card as possible. During the 1970s that would be quite an accomplishment. I don't think the term "Super Collecting" was around back then. Maybe it would have been called "Hoarding".  At the time of the trade I think he had 2 or 3 copies already.

The Vactors lived across the street from our elementary school. During outside recess Tori was one of four kids who were the "Fantastic Four" the best athletes of the class who would take on everyone else in all the different sports and cream us. I didn't hang around with Tori so I didn't meet or even schmooze with his NFL Dad. I was at the house once I think and even then just at the front door with another friend to see if Tori was available to play football or some other sport/game with a group of friends. It was on a weekend or during the summer vacation maybe. I recall he was sick, or he had to babysit his little brother who was sick. We were in the same elementary school class for a few years and attended the same Jr. High, he went to a different high school. He played football in high school but I'm not sure if he played in college or even went to college.

Sometimes I wonder how many of his dad's card he eventually collected? Has he kept them since? Or his brother?

Mascot Monday: The Return With A Rivalry

Yes it has been ages upon ages since I've done one of these. Well over a year. This one is a bit different from the other installments because the Mascot(s) I am covering is(are) not the Official Mascot of the team they are cheering for. This episode is actually about two Unofficial Mascots, and both of them are real people just plain fans dressed up in simple costumes not character heads and costumes. I am talking about a big Rivalry in Football. The NFL NFC East Rivalry between the Cowboys and Indians, Dallas Cowboys and Washington Redskins to be exact.
Wilford "Crazy Ray" Jones 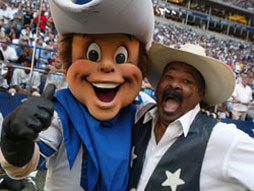 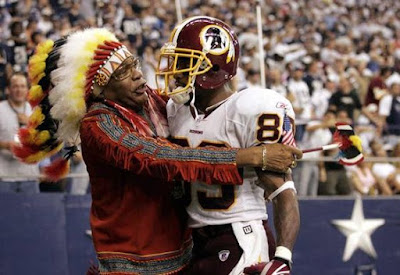 Both men were ultimate SuperFans of their respective teams. They were similar in that they were recognized by their team's fandom and their team as being a sort of Official Unofficial Mascot for the team. Both men were enthusiastic for their team. They butted heads often (as can be seen in the card I'm going to show), but I'm fairly sure it was a friendly rivalry. I'd like to think that both men respected each other the way their teams respected them. After all they despise the other's team not the other man. Right?

Now the card from 1992 Pro Set Football from the Team "Spirit of the Game" sub-set this is card #363 The Dallas Cowboys card. I think it is the only card either man is officially on. I don't have the Redskins card #374 yet. It doesn't have Chief Zee it has a bunch of fans holding letter and symbol signs that read "Hail To The Redskins" as the card has the lyrics to the Team Fight Song on the back. I will need to get that card and make a Washington Wednesday post about it. I have one of those ready in the queue for this Wednesday about a trade from long ago from my childhood. 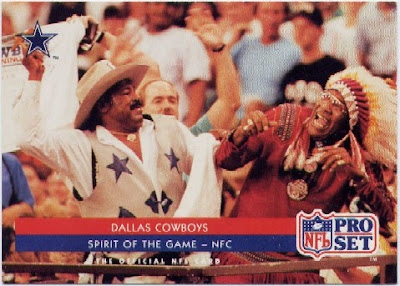 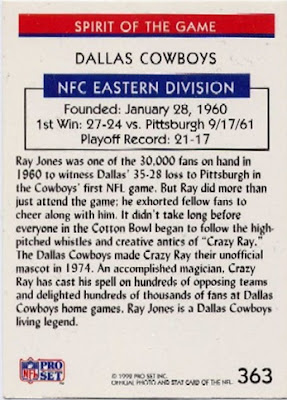 While searching for images of the rival mascots, I found this image of an autographed copy of this card on the site Redskins Hog Heaven. Actually I found it first via Google, then the site that had post it. 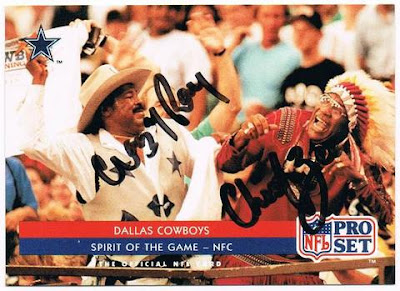 I don't have this autographed card, but would love to find one that is. I would also love to find an autograph of Chief Zee. I had never met him. I haven't been to a Redskins game. Sadly both men are no longer with us on this side of life. Ray passed in 2007 and Zee passed away earlier this year (2016) nine years later.