OK so this post story will probably be two-fold. The main subject will be mail days tracking. I guess I'll start with what I used to do up until a little over a year ago. I think I have described the process in detail before so I'll try not to get too deep into this time. Basically until around mid January of last year (2019) I used to keep pretty detailed records of what cards I got in the mail, from where how much I paid for them etc. Since last January I haven't updated any posts or files, but still stupidly have been keeping all the packages and envelopes separate in their piles and marking the outer envelope with the receiving date, but often not keeping track of prices especially the shipping costs. So I have a few boxes of padded envelopes and PWEs with assorted cards that I know exactly when I got them but may or may not have what I paid for them. Sometimes Sportlots sellers include all the details, but often if they do include a packing slip the shipping fees are not listed. Sometimes they don't include anything so there is not even the record of what I paid for the lot or the singles or what have me. At one time I thought about trying to catch up and have a word file with some stuff that came in early 2019 but it is far from complete I think there are 3 or 4 padded envelopes left from January 2019 and some of the other months I have some packages listed here and some PWEs there. So That stuff came to a screeching halt sometime around this January. Except I have still been marking the envelopes with date received.

I used to keep track of all that stuff in two places first on the community site Trading Card Central (TCC) that was my main "storage" area for my mail day posts. I would then cut & paste my TCC post onto Trading Card Zone (TCZ) which a few years back changed it's name to Sports Card University. Sometimes the TCZ version I would tweak some to cater to that forum's platform. Usually I would draft my posts as a MicroSoft Word file or just a plain Windows Notepad file. Sometimes I would save the original file sometimes not. Well now long story short TCC seems to have finally bought the farm and bit the bullet, and formerly TCZ merged with another site to become Sports Card Club. The TCC site seems to be totally dead now (since around early Mar) and Sports Card Club is currently blocked by my work network and I haven't bothered trying to connect when at home.

So yeah I no longer keep detailed records of what I have gotten, when, or from where, or for how much. I can look at my buying history on COMC and Sporlots and Ebay (to some extent) but I'm not going to bother any more. Trying to do my previous card inventory logging delays the organizing and cataloging of my collection too much. So those days of being super detailed (or anal retentive) are over. I still have some records and I have my Check Out My Cards records that I have been meaning to make some "MailDazed From The Pazt" posts with those. I'm stalled on finding the dang Football cards from my very first order that were mostly from the 2009 Donruss Classics football cards. Maybe sometime I'll get around to that and scanning all the cards from my various orders there.

Well that is all that I will talk about that for now lets look at some cards: 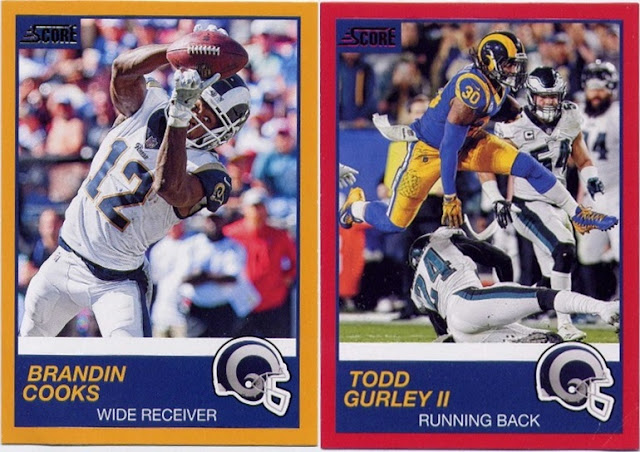 OK so I'll show two cards that it turns out I got from a Sportlots order that I received on 19 Jul 2019. Two 2019 Panini Score Football cards both parallels, both Rams. First one is card 296 Todd Gurley Red parallel and the other is card 299 Brandin Cooks Gold parallel. Neither is a serial numbered card. I only know that information from the little paper slip I put in the penny sleeve that one of the cards was in. Part of my old system that sort of ended last year, except I have still marked the envelopes with the date I received things. I could look in my Sportlots buying history to find out about the order but I'm not going to bother. 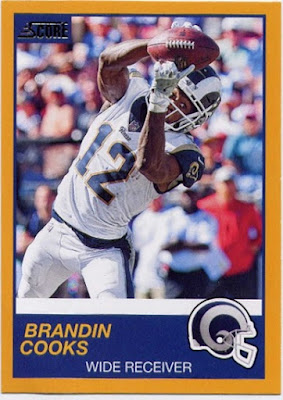 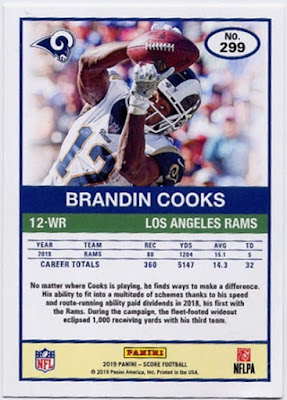 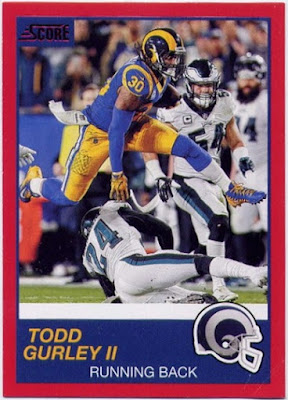 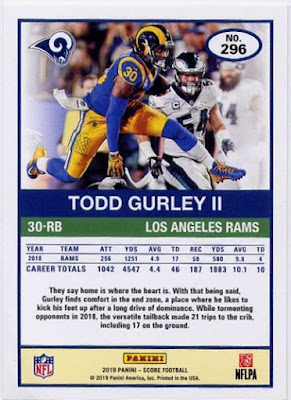 I really like the design of the 2019 Score Football. Especially the helmet in the corner. I wish the backs had more complete stats and didn't repeat the front photo. I'd rather have all stats like in the 1960s and 70s Topps monopoly days. I probably have the normal base versions of these cards from my Sports Card Forum (SCF) team trades but I'm not sure. I should also get the Red Cooks and the Gold Gurley to have those rainbows. Oh well a collectors life is never done, or his collection never complete or dead or something.
Posted by CaptKirk42 at 12:00 PM 3 comments: