ACK!
Once again  have let a month slip by me and have to rush to get a post in before the end of the month to meet my own personal posting quota of at least one post a month. Even if it is a quick and dirty one. Well I do have a few things I really want to post but my damn procrastination of doing the necessary scanning for them prevents me from making those posts. Some of them are partly drafted up just waiting for their scans dontcha know.

In the quick and especially dirty. There is the world of politics. This being an election year and the choices we have are not very enjoyable. That reminds me I need to look out for the latest version of these things. 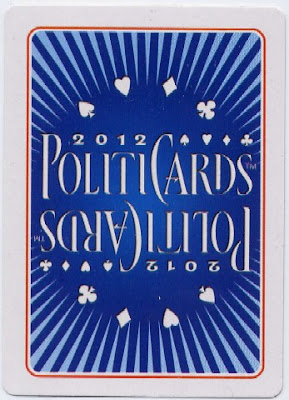 Since 1972 every election year there has been at least one company that has put out a deck of Parody playing cards that feature the popular political figures of the day. They are called Politicards. Somewhere around here I had mentioned the originals. Since this is a quick and dirty post I am not going to go hunting for my past post that barely mentioned the Original 1972 deck. My "Politicards" label should lead you to it.  To the best of my knowledge I have each of the decks except for this current 2016 set.  Which I think they went super cheesy on this year with making kid versions of the politico caricatures and calling it "PolitiKids".

This was just a quick and dirty way to slip in a card I had scanned at one time but apparently haven't posted about. Due mostly to discussing this card on a trading card forum for some all out bring em out drag em down throwdown contest I came in 3rd or 4th or something. 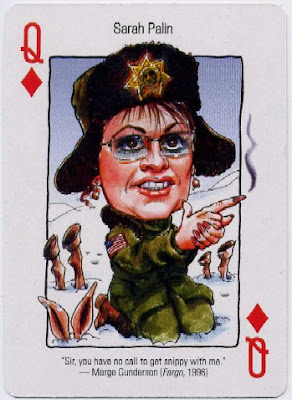 2012 Politicards - Queen of Diamonds Sarah Palin
Posted by CaptKirk42 at 11:06 PM No comments: