This particular card is from 1990 Pro Set Football and is a misprint. It is a double backed card technically it is a wrong front card even though the "front" is a back. I am saving it because the true back (that is the back back) is of a Rams player. The front of the card or the misprinted "back" is a Jet. There is also some green (or blue/cyan) ink smearing/bleeding on the "front". Yes the "back" also has a bit of a printing problem with a vertical white line (or rather lack of ink line) on the left hand side. 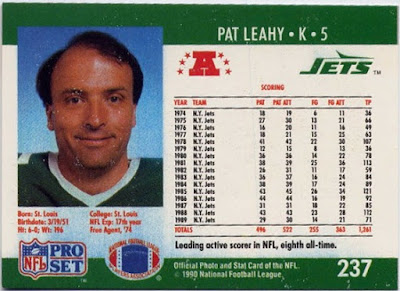 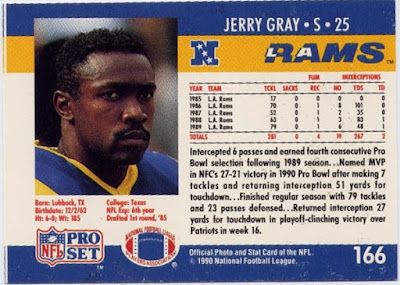 When I first came across the card I saw the Jets player and thought it was going to go to my trade stack, but I turned it over saw it was a double backed card and that one of the "backs" was of my PC Rams.

Speaking of trade stacks there are times I have considered doing a trade stack like Chris over at Nachos Grande or a trade pile like Alex at Chavez Ravining. My biggest problem with it though is the low frequency of my blogging doesn't work with the required high frequency of a task such as that and my want list might not be practical for most collectors.