Return of the Bullpen Cart

OK this is ancient news since it happened back in 2018. For some baseball fans it isn't anything special to write about, but to some old-timers like myself it reaches back to our childhoods. I'm talking about the bullpen carts, modified golf carts designed to look like a motorized batting helmet. Back in the late 1960s and early 1970s the MLB had bullpen carts to escort relief pitchers onto the field. Actually now-days they drive around the warning track. They probably did that back then as well, my recollection of them are more vivid because of the plastic toys of the time. More so the NFL helmet carts which were the carts they drive onto the field to take severely injured players off the field. The football carts of course had that full football helmet design. Back in the day the baseball carts were more shaped like a baseball cap and the carts for both sports looked a bit bulky.

So for the 2018 baseball season the bullpen cart returned. The design uses a batting helmet for the main body and the support bars are shaped like bats. The Arizona Diamondbacks were the team to debut the new wave of bullpen carts. If memory serves it was the Washington Nationals then closer Sean Doolittle who was the first pitcher to use it. Maybe he was the first visiting pitcher.

Long story short Topps made a Topps Now card to celebrate the event (there is even an Allen & Ginter card that I plan on getting) I eventually got it. I waited way too long to get it at the original under ten dollars prices. I even went through a period of it not being available on Ebay for a few months. When it finally did come back the prices were super high, higher than I like to pay. Anyway I eventually paid $15 for a copy. I almost had to go up to $20 or more. Also of interest with this card is the seller sent the Topps Now packet "case" the cards come in when you get them directly from Topps and not from some dealer who has already opened the pack to scan the card for their listings.

So here is the card:
Front: 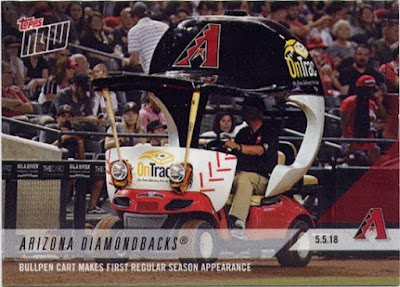 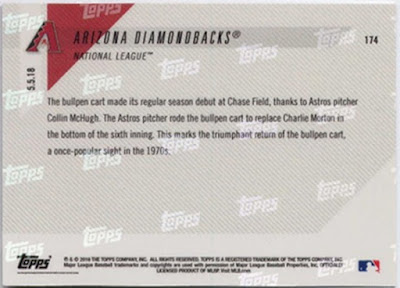 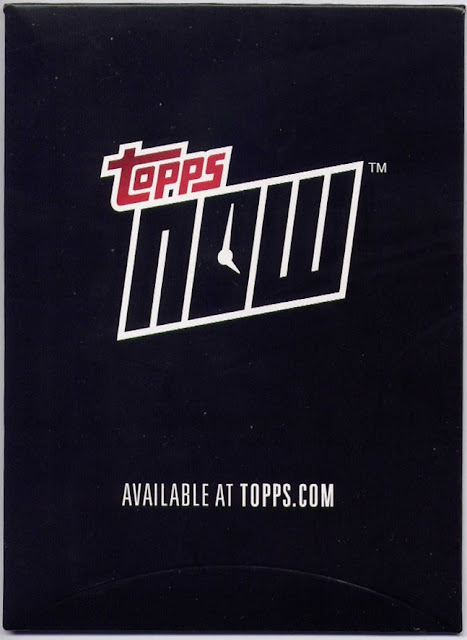