This is the type of post that I have probably done many times before, I call this type of post "Blogged, But Not Blogged" at least I will call it that from now on. Long story short since Aug 2007 I have been blogging about my card mail days over at TCC on my blog over there, and since July 2012 duplicating those posts in a mail day thread at the TCZ forums. I started the TCC one partly as an attempt to post trade bait but it morphed into more of a mail day posting board. There are many cards I have mentioned in detail at those sites that I have never blogged about here on what I consider to be my official trading card blog. A few times, mostly in the early days, I mentioned a card in my mail day and even scanned it (at least the front) but never blogged about it over here.*

This is the story of one such card: 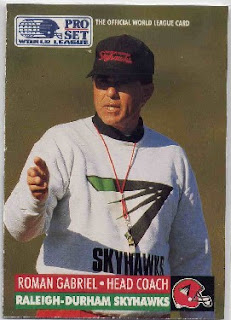 I didn't realize it would be coming from Canada. Anyway I thought it was a card I didn't have but it turns out I had it. I have the full World League Set, but not all of the Inserts to the NFL set which are slightly different thus part of my confusion. My older card had a surprise. Little did I know that what I had always assumed was some odd Gatorade spray caught on film, seems to be some sort of damage to the card. I never thought anything of it because it was the only copy of the card I had and it didn't look like damage. This was before the Internet so I had never seen the image "online" before. Oh well. It appears the "spray" is possibly some kind of low ink or dirty printing plate printing error. 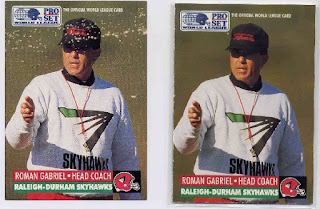 Roman is my fave all-time Rams Quarterback (Down Kurt Warner Down). I was told some years ago that when I was 3 or 4 my family was worried there was something wrong with me because I didn't talk much, so I was sent for testing at an Easter Seals Medical Clinic for hearing tests and other such nonsense. I remember some of those visits, but not this particular story. At the time I didn't know the reasoning of the trips to this particular medical clinic. I just looked at them as any other childhood "trip to the vet doctor", except I recall I didn't like going to these extra ear tests. Apparently my folks thought I might be deaf or have some other physical or maybe mental problem. One of the physicians or maybe an assistant or technician there noticed me doodling pictures of little football men (mostly of a quarterback with the number #18 on his chest), and in talking to me discovered that I was a big Los Angeles Rams fan and that Roman Gabriel (#18) was my favorite QB. Well then they found out I didn't have any physical problem, I was just extremely shy. 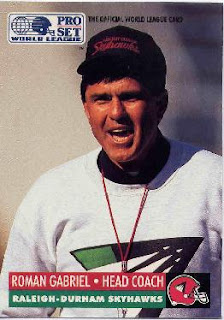 The subject card of this post is from the 1991 Pro Set World League of American Football insert set from the 1991 Pro Set NFL card set. On the back by the card number these cards were labeled World League Collectible there are 32 cards total. I mentioned a confusion of these cards because Pro Set produced a 150 card WLAF set. I had bought the set whole in one of those small card boxes that has the outer sleeve of the box over the container box.

ON to the card: 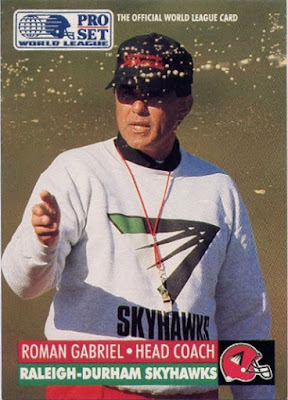 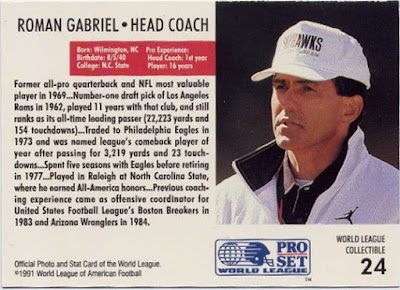 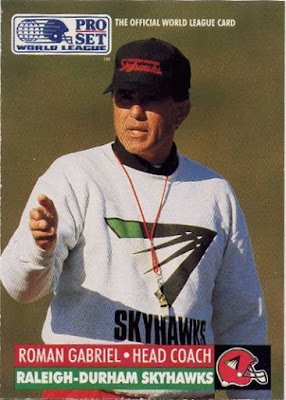 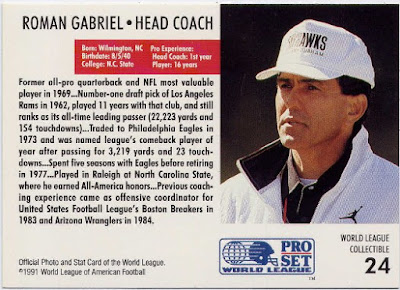 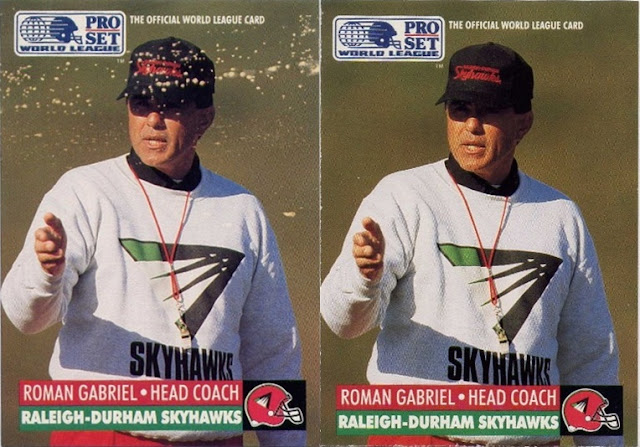 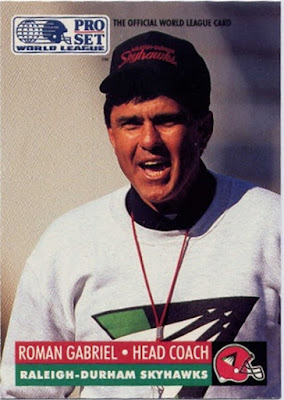 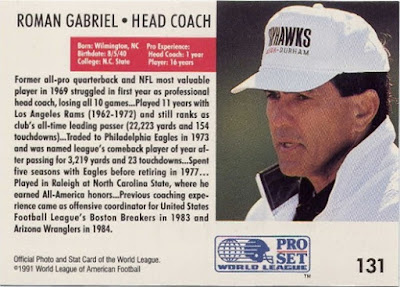 * This post is the first one that I drafted for this "Blogged But Not Blogged" series so the introduction is a little longer than other posts in the series. I wasn't sure of the order I would publish them in. As of the 01 April 2018 (now 28 Apr 2018) editing draft of this post two other posts from this series have been published before this one. I have created a "BBNB" label for this series. (OK kids you should be able to figure that one out) I usually cut & paste the original blog or forum posts and then edit and add onto them so things could get a little confusing with these posts.

For this post the original posting in my "CaptKirk42's Collection" TCC thread (post #21) didn't go into too much detail. So this post is more of a rewrite than a direct copy. The previously posted stories were typical direct copy with some rewriting. It should also be noted that most of the images from the old TCC posts are no longer showing due to Photobucket's change to their third party sharing polices. Free accounts can't do it anymore. So many of these images will be newly uploaded scans, or copies of the original scan/photo. The first 3 images in this post are my original scans. The rest are newly scanned images that I have cropped better and straightened their angles via the free photo editing software "PhotoScape"
Posted by CaptKirk42 at 12:00 PM No comments:

For collectors of vintage cards this design is an homage to the 1966 Topps Football design, which in turn is sort of an homage to the 1955 Bowman Baseball design. The most prominent feature is the wood grain look with the television screen image. In 2005 Topps produced an All-Time Fans Favorites Football set (although the TradingCardDataBase lists these as being 2004) The All-Time Fans Favorites set is similar to the Topps Archives type sets where they use older and vintage card designs for newer cards. Most of the designs from this set appear to be from the 1980s and late 1970s.

Here is a 4 card subset from that set the features the best players from my fave (and by fave I mean tied for number one) NFL team the Los Angeles Rams recently returned from being in St. Louis for 20 years (1995-2015). These four players individually had impressive careers primarily played for the Rams together they were known as the FEARSOME FOURSOME. OK one of a few defensive lines that went by that name, but the Rams were perhaps the most widely known. The Giants, Lions and Chargers have also had that nickname applied to their defensive line around the 1950s to 1970s era. 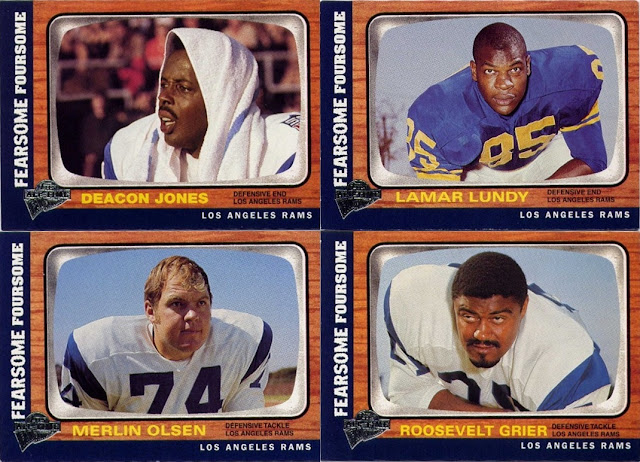 The Rams Fearsome Foursome were: Deacon Jones, Lamar Lundy, Merlin Olsen and Rosey Grier. In my book they are the FEARSOME FOURSOME of note. 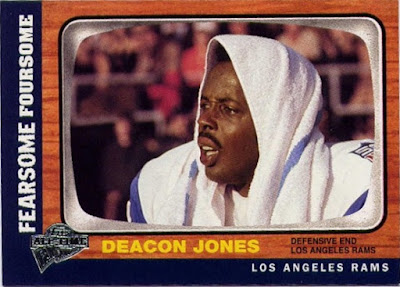 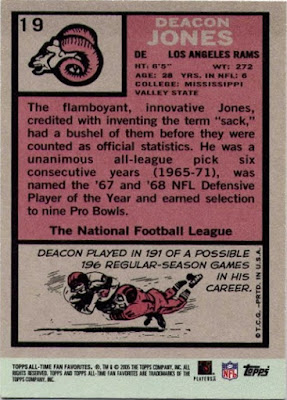 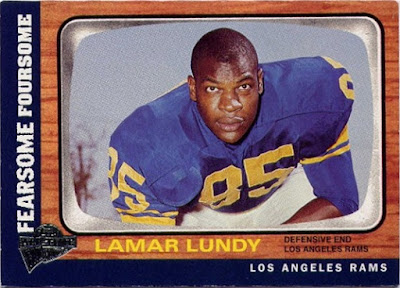 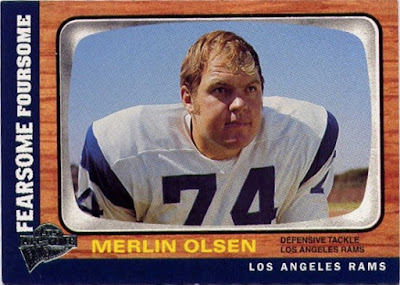 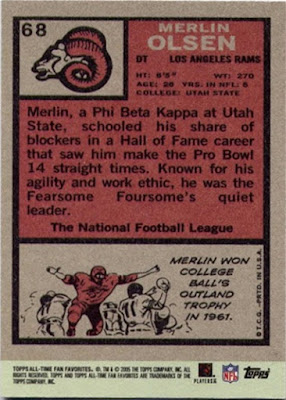 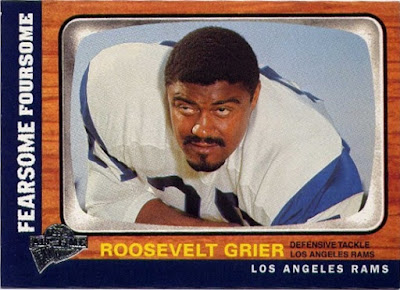 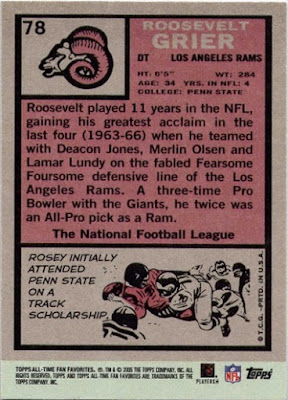 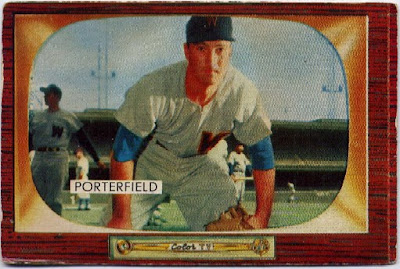 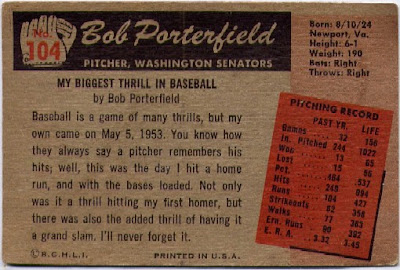 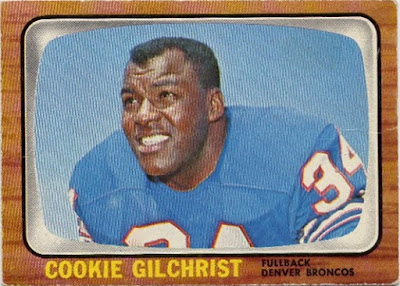 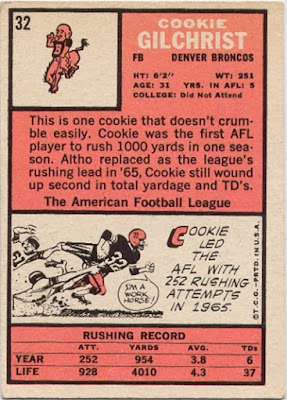