I got this card a while back on 26 March this year, but hadn't talked about it. I didn't note how much I paid for it, but I got it from Ebay so I could probably check my records there to be sure but I think it was between $7 and $15 It is one of the auto cards from the 2009 Rittenhouse Women of Star Trek card set. This one is Star Trek: Voyager Claire Rankin as Alice. It is an on-card autograph in blue sharpie. This card is not numbered and has no serial numbering. I couldn't find a reliable checklist for these so I'm not sure how many autographs this set had. *Sigh*  I would like to get more of these autos for decent prices and find a good price on the base set. I think there have been a couple of these Women of Trek sets. 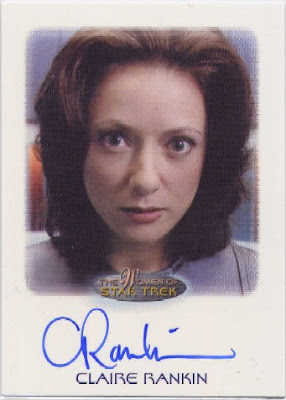 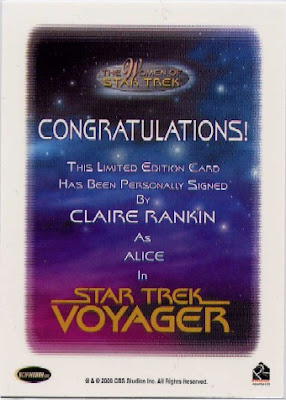 I found a box break video from Sportscardhaven Reviews of this set of cards. An interesting video but it is obvious the guy knows little about Star Trek and is clearly a sports guy as a couple of times he called the costume cards "jersey cards". He he.

Rittenhouse is also known as scifihobby, actually I think Rittenhouse is the parent company not 100% sure on that one.
Posted by CaptKirk42 at 1:01 AM 3 comments: