Charles M. Shultz cartoonist of Charlie Brown and the Peanuts gang had his blockheads and MLB has it's Ball Heads. Although New York's Mr. Met might not be the very first Ball Head in the league he seems to be the most popular Ball Headed baseball mascot (and recently voted favorite mascot of all sports) He is often in contention with The Phillie Phanatic as the most popular mascot of the entire league. Making his "physical" debut in 1964, Mr. Met was actually introduced in cartoon form in 1963 on game program covers, the team's uniform, and scorecards. Other "Ball Head" mascots that Mr. Met looks suspiciously similar to are; The Cincinnati Reds original Mr. Redlegs, the more recent Mr. Red, the current incarnation of The Braves mascot Homer The Brave as well as countless Minor League mascots.*

Mr. Met had a hiatus from around the mid 1970s before the boom of Mascots to 1994 when he was revived.

The card I picked for this installment of Mascot Monday is from Upper Deck manufactured in 2006 as part of a three card mini set aimed at Kids. The three mascots chosen to represent for this set are Mr. Met, The Phillie Phanatic and Wally the Green Monster (Red Sox). I will post about this set sometime later. Apparently it was for some kind of giveaway or Contest. Each card has a contest/prize code on the back to be enter on the special contest website. UGH really hate all this Website code stuff. 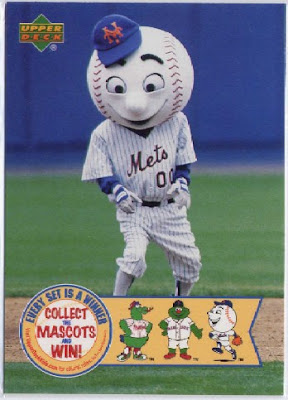 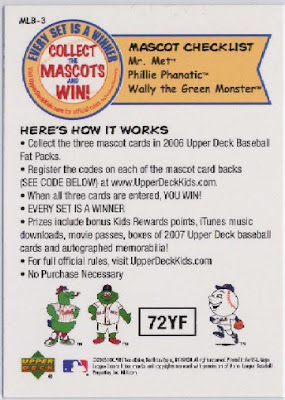 * I recently made some Ebay purchases for a boat load of Minor League Mascot cards so I will have plenty of fodder for future Mascot Monday posts. 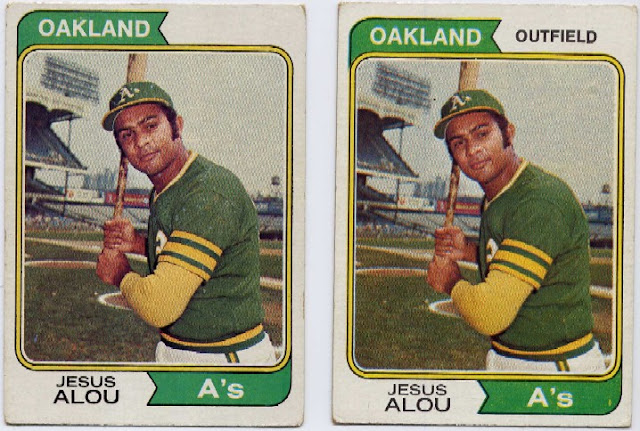 Back in the day when I got some of my first 1974 Topps Baseball cards one of the ones I pulled was the Jesus Alou "No Position" Error Card. It is still one of my fave cards from that set. In the late seventies I soon became aware through the first few price guides that it was an error that Topps eventually had corrected. In general (contrary to popular belief that an error or misprinted card MUST be more than an error free card) error cards are no more valuable than their corrected counterparts. There might be some exceptions, but usually if they do fetch more money it isn't too much more. Sometimes uncorrected error cards fetch high values because of the fact that they were never corrected, but that is not the norm. 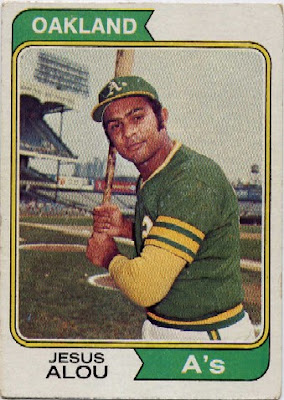 I think it took me a few months (or maybe a year or two) to realize it was an actual wide-spread error and not just a one card fluke (thanks again to some of the early baseball card price guides of the late 70s - early eighties). It also took me some time to notice that there was a mistake there, hey I was a kid at the time. I think the error variation is rarer than the fixed corrected version but for years I ran into the problem of not being able to find the corrected version. As with many of my older card needs I put getting the corrected variation off almost completely. A few months back I had searched sportlots.com and saw the error version, but not the corrected one. Then after checking a few other times found it and put it into my shopping cart and I finally checked out. I had been sitting on my shopping cart for quite sometime for some of the cards.

So Now I also have this card: 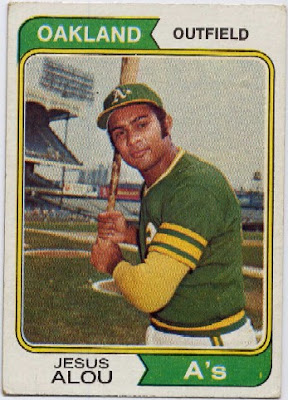 The back of both variations is the exact same. I scanned the corrected variation because it appeared to be a darker bolder readable print than my error variation. It is really six of one half-a-dozen of the other. If I had played with the brightness on the saved image it would still be the same difference. 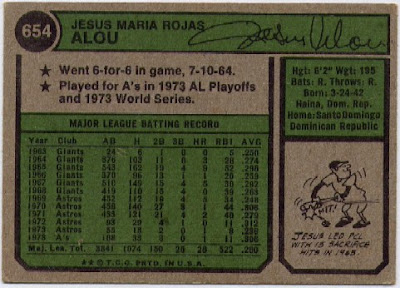 There is also of course the O-Pee-Chee "No Position" Error variation. Which I understand OPC never corrected (but Topps did? There's a switch). The O-Pee-Chee variation of cards are normally rarer than the Topps versions anyway because they normally didn't print as many and most of them never left Canada. 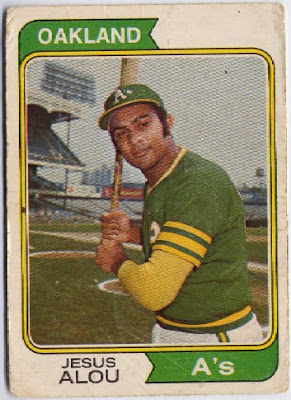 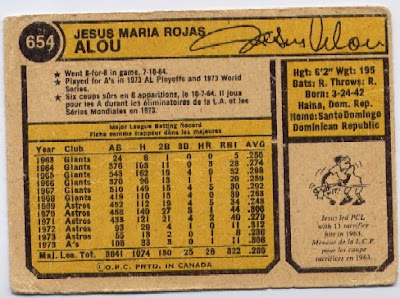 As you can see the OPC front is identical to the Topps which is par for the course. Also par for the course is the back being a bit different. In this case they changed the hard to read black text on a dark green background to easier to read black text on a yellow/gold background. Plus being Canadian they had to add the French translations of stuff. The added French text with the cartoon makes the cartoon smaller.

The sportlots seller that I got this OPC card from I also got some other Jesus Alou cards: 1970 OPC, 1971 Topps, and 1973 OPC I will probably make a post about that trio of cards some day, but not in the immediate future.
Posted by CaptKirk42 at 1:00 PM 3 comments:

As a kid Tom Seaver was one of those players who I had a few cards of and would try to collect more of. I wasn't a big Mets fan but he was one of the All-Stars of the time so he was on my list of players to collect. Here is his 2012 Topps Baseball Archives Card it shows a youthful Tom (Much younger than I remember from my 1970s cards from back in the day): 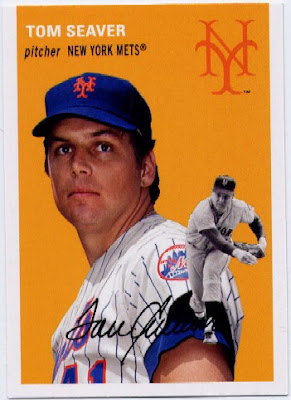 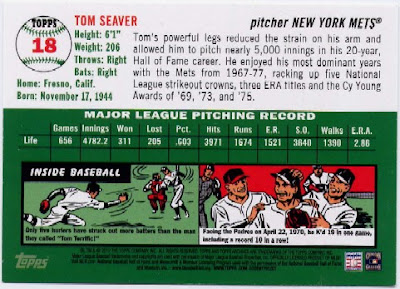 Now here is the fun part of this post. In a group box break on one of the forums I frequent, the 2012 Topps Archives was one box we broke, and it is a favorite product of this particular group. In this group break I had the Nationals and the Mets as my teams. Well we pulled a real One-Of-One not an Ebay 1/1 but a true 1-of-1. This beaut of a PRINTING PLATE. 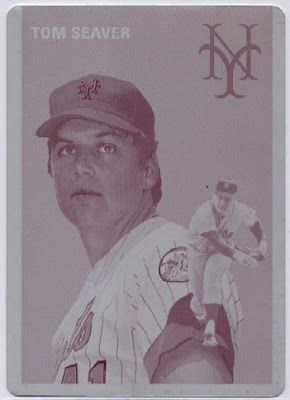 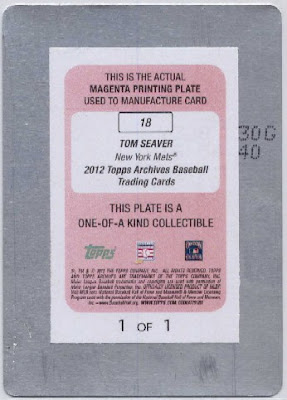 Before I got this I had never had a printing plate, never seen one in person. I hated the idea since Hey it's a "manufactured 1/1" made only to promote the whole "one of one" thing. Plus why wasn't it a mirror image? Well I learned that the current printing process used for cards uses regular image plates, not mirror imaged ones. So yeah OK they are legit. Well after seeing it in person I kind of started liking it. Then I liked it even more and now am not a printing plate hater like I was. I am still a game used hater, manufactured patches hater and a Rip Card hater, but those are rants for a different post. I am now PPP (Pro Printing Plates).

Oh and that black dot on the right side to the left of Tom's head in the mini action pic unfortunately is something on the plate. At first I thought it was a speck of dust on  my scanner that got scanned, but I checked the plate and it is on it. Not sure if it is a particle of dust or another foreign object or a dent/surface scratch of some kind. There are a couple of tiny surface scratches that the scan didn't show.

I noticed via a Google search that the Cyan Printing Plate sold on Ebay in September for $25 bucks.  So two of the four plates have surfaced. I think it would be cool for someone to eventually have the full set of plates, but in the meantime I'm holding on to this one.
Posted by CaptKirk42 at 4:30 PM 4 comments:

SCREECH
I resisted the temptation to post this mascot in the First Mascot Monday post. My main Homie Mascot who represents the Washington Nationals Screech. 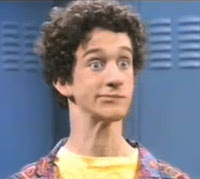 NO! NOT That Screech.

Today I am showing the card I believe to be his Rookie Card 2007 Topps Baseball Opening Day card number 215. 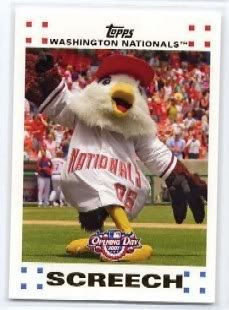 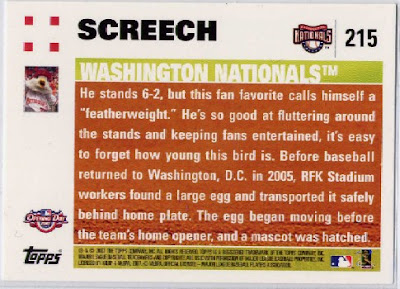 Screech was "hatched" on17 April 2005 at RFK Stadium in Washington DC (much in the same way as the Orioles Bird Mascot) the inaugural season of the Washington Nationals formerly the Montreal Expos. 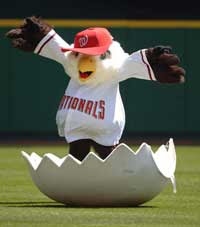 Screech Hatching
(Wasington Nationals at MLB.com)
As you can see Screech started out as a pretty chubby eagle and wore only a team jersey with the number 05, his "hatching" date, and an oversized cap. In 2009 Screech slimmed down, he still wears an oversized cap, but he now wears pants and shoes more of a real uniform. I wasn't sure about the change at first, the first picture I saw of the slimed down Screech I didn't like, but now I think he looks better slim. Oh and his jersey number is now 00 the standard jersey number reserved for mascots I guess. I miss the 05 though, but I guess it confused people when they saw a team player with the number 5. 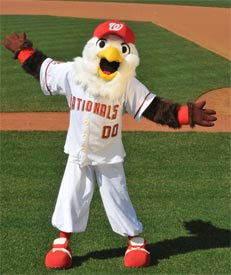 A longtime Senators/Nationals fan that goes by the name "Screech's Best Friend" has a blog called Nats320. The 320 is the seat section the blogger had when the Nationals were playing at RFK before their new stadium was built and opened in 2008.  I'm a little concerned as the last post on that blog is from last year and with the success that Nats have had here in 2012 I would expect at least a "Yippie We are Number One!" when the Nats clinched the NL East Division. Screech himself also has a blog Screech's Spot over at MLB.com/blogs.


I am always on the lookout for Mascot cards. I also accept Mascot Postcards and team issued promo cards/photos of mascots.
Posted by CaptKirk42 at 12:00 PM 1 comment: