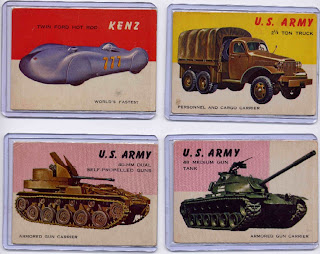 A little while back from Ebay I got my first four cards from the 1953 World On Wheels set from Topps. The set is mostly sports cars and classic cars, but there are some futuristic fantasy cars and some Military Vehicles. These cards remind me of the images you would see on the front of the boxes of old model car kits. I think that is what drew me to these cards, and at first I thought they had been cards inserted into model kits (they were not). My first four cards (#33, 55, 62, and 85) are from the first series cards number 1 through 160 cards 161 trough 180 are series 2. Series one has all Red Backs while series two (which was released in 1954) supposedly has Blue Backs and Red Backs. 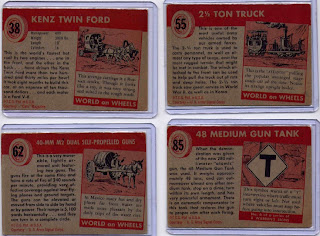 I just have these four right now, but would like to get the rest. Apparently series 2 is much harder to obtain but have never really been too expensive. Before the internet and before Ebay these cards were very scarce and hard to obtain. I vaguely recall seeing the entry for them in one of the early 1980s Sport Americana Non-Sports Price Guides I own. At the time I wasn't really impressed, it may have been the sample image the guide showed of a classic car or two. It also states that cards 1 - 170 have Red backs and cards 171-180 are Blue backs. There is a blog Chuckman's Non-Sports Trading Cards of the 1950s (Volume 1) that shows all the cards fronts in the set and a sample of the wrappers.

I am really satisfied about the condition of the cards I got, I was expecting them to be all beat up and terrible but the four I have so far are in excellent shape for their age, although it was weird to me that the seller shipped them in "Rookie Card" toploaders. Well I guess they are rookie cards of these vehicles LOL.

And Now the Cards: 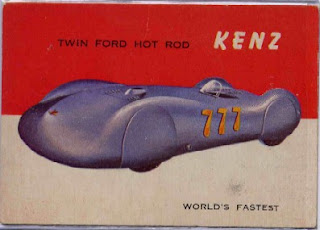 Card number 38: KENZ Twin Ford "World's Fastest". Maybe in the mid 1950s this car was the fastest, I'm guessing a few have passed it's record since. When I first saw this card I thought it was a futuristic car, apparently there was an actual racer built of this. According to the back it took 8 months and $10,000 to build. It has two, thus the "twin", engines one in the front one in the back both V-8. As I said when I first saw this car I thought it was a fantasy future car, but it seems to have been a real car. This was the first card I got from this series and was going to be the only one until I saw some of the Military vehicle cards. It reminds me of the cars that Snake drives, and all the other villain drivers, in the Speed Racer cartoons. 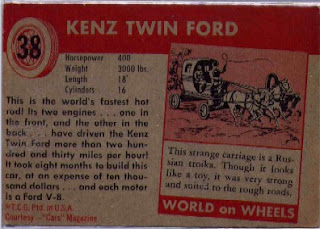 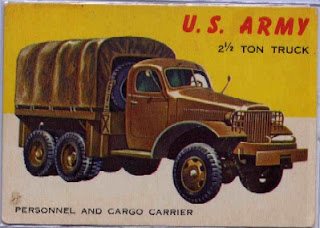 Card number 55: The two and a half ton truck, one of the power workhorses of the U.S. Army. Built to carry troops and equipment. Not much else to tell about this one. It is a cool looking truck. 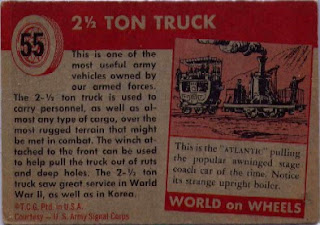 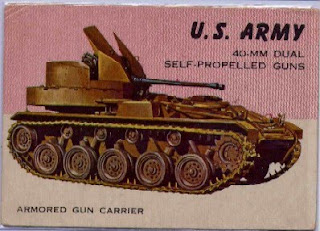 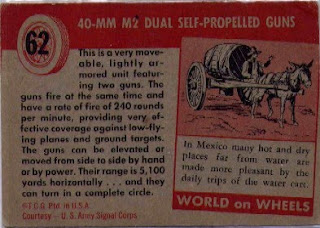 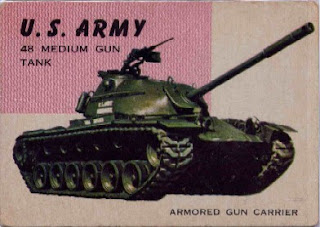 Card number 85: 48 Medium Gun Tank. I forget if this was the first military card I picked out or if it was the previous card (#62). The stats on the back state that this 48 Ton tank can "Stop on a dime, turn within it's own length" among other things. Wow that is amazing for a beast of this nature. As tanks go it looks pretty nice. 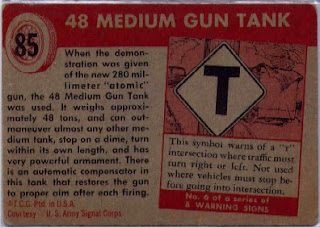 As usual with sets I am collecting if you have some of them let me know what you got and what sort of sale/trade can be worked out. Of course simple donations are also accepted.
Posted by CaptKirk42 at 2:20 PM 11 comments: