Clowning Around A Little

Last spring training (2015) Comedian/Actor Will Ferrell pulled a publicity stunt for an HBO "Funny or Die" series where he played on 10 MLB teams in the Cactus League in one day. He played all nine positions and had two at bats. The logistics and the "contracts" must have been a nightmare. The ten teams he played for were: Athletics, Mariners, Angels, Cubs, Diamondbacks,  Reds, White Sox, Giants, Dodgers and Padres.

Anyway Topps in their infinite wisdom of all things trading cards made a 10 card Will Ferrell Sub-Set for 2015 Topps Archives Baseball. They also have autograph version of his cards and of course each of the millions of parallels they produce each and every year. Each of his cards is on a different vintage or modern style card. I wasn't sure if I wanted to pursue these at first but then I thought OK as long as I don't spend too much on them. It would be nice to get the autograph versions but those like most things card related people are selling for just too damn much. Back in January this year (2016) from Ebay I got the first of the cards from the set for $2.99 + $3.00 shipping. $5 or $6 total is all I want to spend for each card. I might go up to about $10 including shipping but these quite frankly aren't worth more than about $5 each in my book. 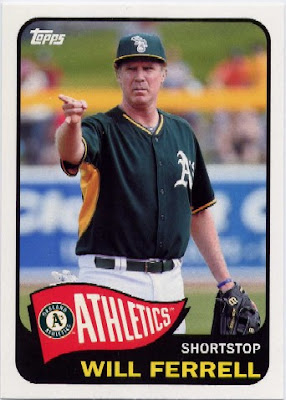 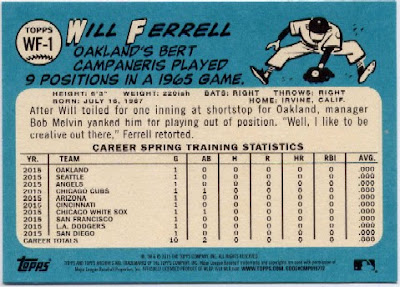 As with many of Will's promotional gimmicks he was more playing around jack-ass clown than serious working participant. I need to get the other nine cards in this set. I also need to get the other 2/3 of the original 1965 Topps Baseball set I need that I have been trying to finish building for the last 2 years. Technically for the last 51 years.
Posted by CaptKirk42 at 12:00 PM