Washington Wednesday: Spirit of The Game

Spirit of The Game

Some weeks back I mentioned the card I'm going to show today, in of all places the semi-return of my Mascot Monday feature. Dang it haven't made any since. I got the card from a Sportlots Store along with a few other cards. 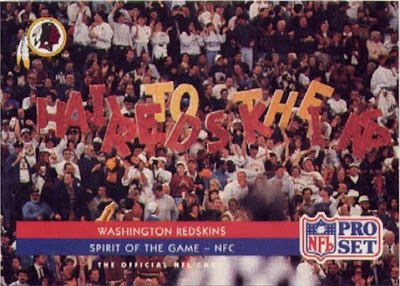 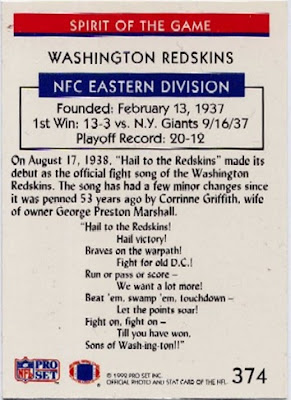 Notice the lyrics to the Redskins Fight Song "Hail To The Redskins" are on the back of the card. If the image is not clear enough or your computer/smartphone doesn't show the image(s) from this post the lyrics are as follows:

Hail to the Redskins!
Hail Victory!
Braves on the Warpath!
Fight for old D.C.!

Hail to the Redskins!
Hail Victory!
Braves on the Warpath!
Fight for old D.C.!

The card stops at the line "Sons of Wash-ing-ton.". Then final line the "old D.C." is held for several bars sort of like old vaudeville acts. The Line "Fight for old D.C." often sounds like "All D.C." and might be sung that way. It was at one time "Fight for ol' D.C." Technically I think it still is. I also understand that at one time the original lyrics for the middle verse was "Scalp 'em, swamp 'em -- We will take 'em big score.  Read 'em, weep 'em, touchdown - we want heap more" Looks like them 'Skins were a bit more racist in them olden days than they are now. People still accuse them of being racist.

I also got the Los Angeles Rams "Spirit of The Game" card as well. 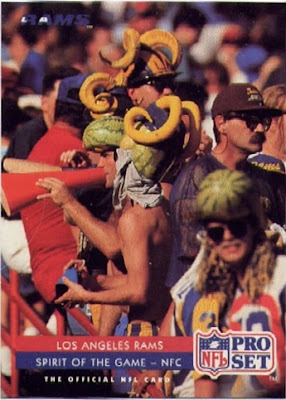 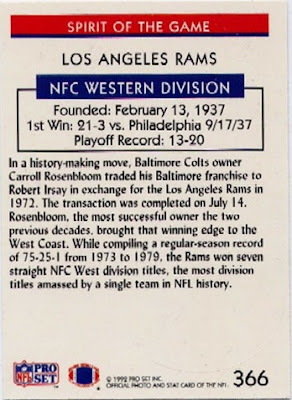 Yes these cards from 1992 were THAT OLD that the Rams hadn't moved to St. Louis yet (They moved there in 1995) I don't know what is with the melon helmets one guy even has the Rams horns hat on-top of his melon helmet. He is in front of another guy with a melon helmet and they look like they are the same person. Weird.

Related links at:
haruth.com
wikipedia.org
Posted by CaptKirk42 at 12:00 PM