In this episode of Card Of The Whenever I go to a sport that I am not an avid fan of - Golf. The only thing about golf that I really like or enjoy about the sport is Mini Golf. Even that I haven't done in years and years. Partly because my area doesn't have any Putt-Putt mini golf courses anymore.

Back to the card. I don't recall where I got this one or for how much. I know it wouldn't be for too much. I think I got it solely because the player Michelle Wie is a golf babe. That being said this particular card doesn't show off her sexuality.

On The Trading Card Database it was hard to find this card because it is in some sort of Rookie Cards insert set called "Retro Rookies". Oh and it is marked as being a 2014 set. At the time I was looking for it on TCDB I had no idea the set had inserts let alone that it was released the year after the copyright date on the card. I'm fairly sure the set is one of those where the base cards like this one were intended to be sent to the golfers to get autographed.

Anyway here is the card for this month's quick and dirty get it posted before the month ends end of the month post. 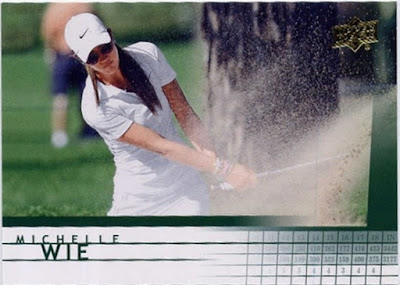 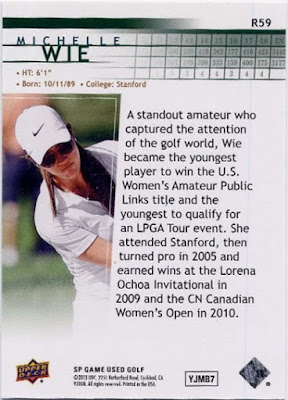