Some Ranting And An Autograph

Not sure what this post will be about just yet.

As usual when it comes to blogs and blogging I have been doing that barely post one post per month per each of my blogs. Another thing about blogs I have been doing lately well something I haven't been doing lately is reading other people's blogs. Years ago I would easily read 20 to 30 mostly card blogs to keep up with the goings on in the blogiverse, but now days I read very few if any. For about a year or so I have still gone through the daily ritual of seeing what the new posts are, but rarely bothering to read any posts in their entirety. I used to have a laundry list of blogs that I HAD to read each and every time they made a new post, now I don't HAVE to read any blogs anymore. Many days I don't read any blogs. My interest in reading blogs daily has dropped down to almost nothing. Now when I check for new posts I scan the initial preview and only if something interests me either in the title, the thumbnail image or the first couple of sentences showing will I read the post. I usually try reading the special Blogiversary posts or the highlighted special achievements.

That being said the few people following and reading my blog will probably drop from only a handful to next to nothing. Oh well that doesn't bother me - much.

Anyway the card I decided to show was one that I have had for sometime. I scanned it last month with the batch of cards I ended up blogging about then. I have been planning on waiting to blog about it until I had gotten a similar card, since it is an autograph card I was waiting until I had purchased and received one of the other autographs from the same series and actor and then would post about both cards. But since I had scanned it and I don't know when (or if) I'll get the other card I present it here and now. 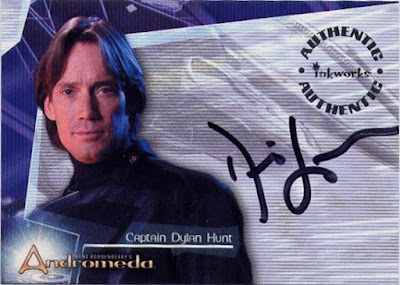 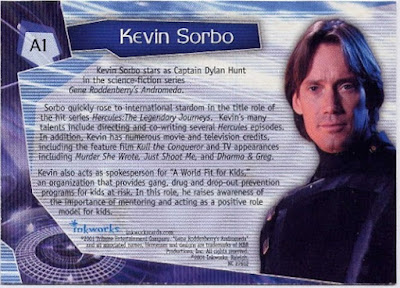