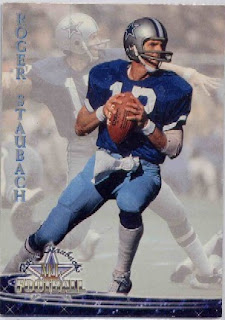 Long story short Ted Williams' son John started up a card company in 1992 (it folded in 1995 producing 2 baseball sets and 1 football set). The company released a baseball set of retired players in 1993 and again in 1994.  The 1993 set includes players from the Negro Leagues and Women in Baseball. The company also released a football set in 1994.Yes a Football set many people call it the Roger Staubach set since the cards say "Roger Staubach's Football" on the front. Each set contains 162 cards. There also seems to be a "Trade for Roger Staubach" 9 card set (including the checklist for the nine cards) I'm building on the 1994 Football set and both Baseball sets (1993/1994) plus some of the subset stuff. See my Master Want List for the current status of what I need..

These cards a beautiful cards and perfect for getting signed. The cards have a main "sihouette" picture of the player often in color but sometimes for the earlier players black & white, with a Color "ghosted" background picture. Anyway you look at the I think they are really cool looking.