I must have slept late.

Don't worry folks I haven't slipped into the Twilight Zone... or maybe I have. I realize it's been ages upon ages since I've done an update to this card blog. My main focus and concentration has been on things other than those small 2.5" x 3.5" pieces of cardboard with pretty pictures on them. For 2012 I will try to improve my updates here. I can't guarantee a specific number of posts per month this year but I will try to be more regular than I have been.

Anyway Super Bowl Sunday is fast approaching us (February 05) and Super Bowl XLVI (46) is a rematch of four years ago with the New York Giants and New England Patriots. Yes I know in my logo filled heading I used the old "retro" helmets of the Patriots. I prefer that helmet over their gaudy Silver ones they have now. It took me two or three years to realize that the streaks on the top were the tricorn hat the Patriot was wearing and not a patriotic streamer.

OK to keep this on the topic of cards let me see what random card I can pull from my hard drive archives... 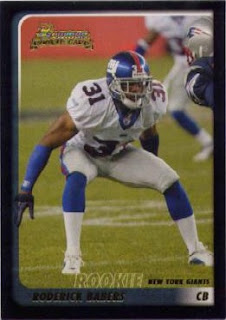 I think this card is still in my possession. I'm not a big fan of The Giants or the modern Bowman Rookie heavy cards so this 2003 card I think I will have to schlep onto Ebay or send to checkoutmycards.com sometime (if I still have it, I might have slipped it into a trade with a Giants or Rookie Card collector).

Actually here is a better card from my PC to show: 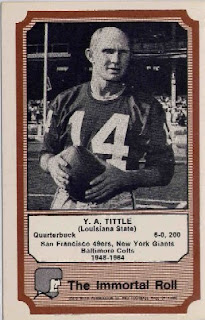 1974 Fleer Hall of Fame - Y.A. Tittle
From the 1974 Fleer Hall of Fame (AKA: The Immortal Roll) set. Y.A. Tittle best known for playing with the Giants but he also played on the San Francisco 49ers and the Baltimore Colts. These HOF cards were unnumbered. The following year Fleer came out with a similar set of cards that look very much alike except they had numbers on the back and the card fronts have a brown border instead of a plain white border. EEK I need to check to see if that card is really that far off center or if it was just my hack-crop job when I scanned it. It could be a combination of both.
Posted by CaptKirk42 at 11:00 AM