In today's political madhouse drama, mostly due to Democrats fighting tooth and nail to impeach President Trump by any means possible with wild and weird ways that are by no means constitutional and some of them not entirely legal just because they hate him, it is difficult to say anything positive about President Trump without being given the third degree by somebody somewhere. If you say something negative well then you are applauded and in the running for citizen of the year.

Anyway I decided to get a couple of Topps Now cards that feature President Trump. These cards show Trump receiving a customized jersey from the World Series Champions. Sure there are two Barack Obama cards that are similar maybe more. However there have been many athletes and full teams that have declined the White House invitation to meet with the President specifically President Trump after winning their sports most prestigious trophy. No matter what they claim declining to go to the White House to be honored as a team for winning your sport's championship because of who POTUS is, is a political decision and the fact is a great majority of people hate Donald Trump. When Obama was in the White House there were a few players that were no shows but not entire teams. In basketball the Golden State Warriors made it clear they would not make the trip to the White House because of Trump so Trump uninvited them. The Warriors visited the African American Museum instead. I'll just leave that statement to say what it will. These Trump cards are proof that there are some teams that have made the annual trip to the White House during his administration and continued the tradition and honor.

Usually on these trips the team presents the President with a customized jersey with his name on the back and the number one, or the number President he is (45 in Trump's case), or in the case of the card with the Astros the last two digits of the championship year.

On to the cards for this post. Both are Topps Now cards I got them from Ebay on Monday 23 Apr 2018.

The first is from 2017 and celebrates the Chicago Cubs historic 2016 World Series win. They presented President trump with a customized Cubs jersey with the number 45.The card is number 308 I got it for $5.99 plus $4.49 shipping. 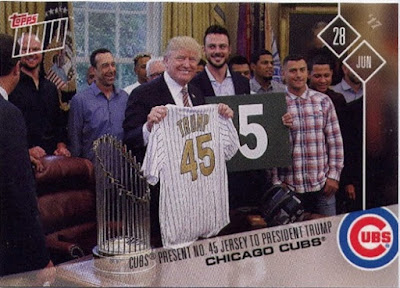 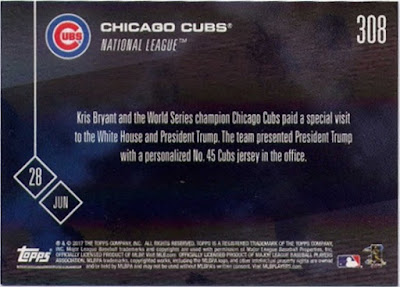 The second card is a 2018 Topps Now number ST-9 and celebrates the Houston Astros 2017 World Series win they presented Trump with an Astros number 17 jersey. I got this card for $6.25 plus $1.35 shipping. The Astros card is an odd one since it doesn't say anything about the event on the back. 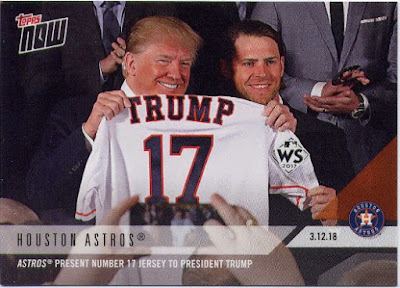 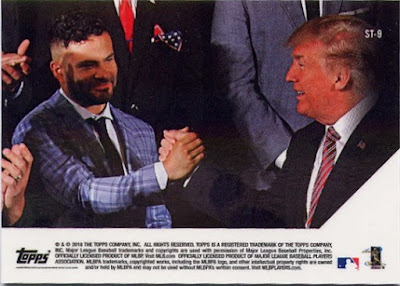