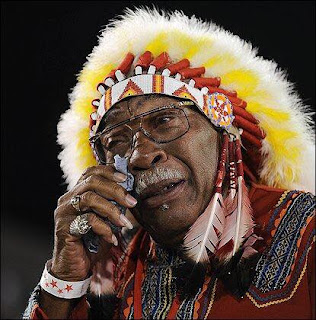 Well they went ahead and did it. The NFL's Washington Team The REDSKINS gave into the pressure to change their controversial Nickname. I won't go into all the history of the name and the periodic attempts from outside entities to force the team to change the name they have held for 87 years. all that can be found on the interwebs. Along with all the Pros and Cons. Sure some people are now not offended but now a different group of people have been offended and some angered.

I will say that I am far from happy about the whole thing. I've been a life-long fan of the team, growing up with an older brother who was a super true blue fan, even my father who wasn't much of a sports fan enjoyed watching the occasional Redskins game on the telly and kept track of them during the season from time to time (mostly I think to please his fan family). What ticks me off the most is it appears to be that the owners were being blackmailed by FedEx one of their biggest financial supporters, investors and others. The delivery service sent a letter saying basically "Change the name or move to another stadium", they have about 7 more years on the stadium's lease so that isn't really one of the pressing issues. Also several big named merchandise retailers such as Amazon, Target and Walmart to name a few have pulled all Redskins merchandise from their shelves and have stopped selling them.
A couple of weeks after announcing that the name was going to be changed and the old name dropped the team now has a temporary name for the 2020 season "The Washington Football Team". They will keep the maroon and gold colors, but will be logoless. The helmets will be plain maroon with large gold numbers on the sides. Apparently they will have a permanent as yet unannounced new name and logo starting in the 2021 season. 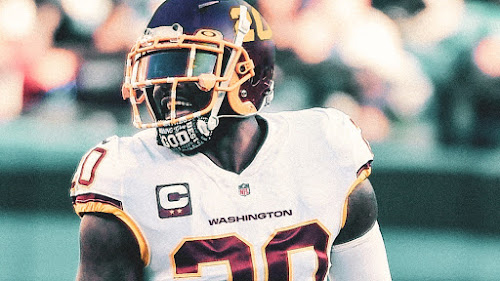 I guess to a non-fan the best analogy would be if the high school you and your siblings graduated from, maybe even one of your parents and their siblings graduated from as well, was forced to change their mascot's name and/or even the entire school name. That is how it has affected me. After several generations of history.  It just "always was the way it was". It is part of the fandom intangibles. You don't know exactly what it is unless you have it. Even then it seems to be different for every fan.
As a fan of the old team I am not in the mood to attempt to become a fan of whatever the new team will be. Collecting cards for this year/season will be bittersweet. I'm not sure what I will do for next season. Do I stay with the team trading group I am a part of once the new team is established and cards baring the new team name and logo are made? A big part of me doesn't want to.
OK rant over for now here are some historic DC Football cards that are sure to offend some people.
Lets start with one of my fave QBs of ALL-TIME Sonny Jurgensen. This one is from 1991 a special Quarterbacks set. I chose to show it because of it's original old school looks, especially the back pic with the original arrow helmet design (not the 1990s retro version) 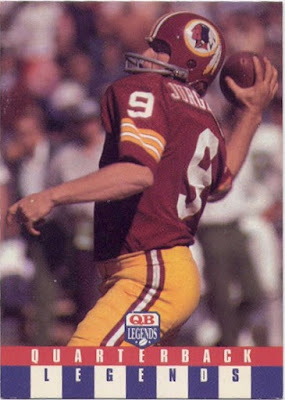 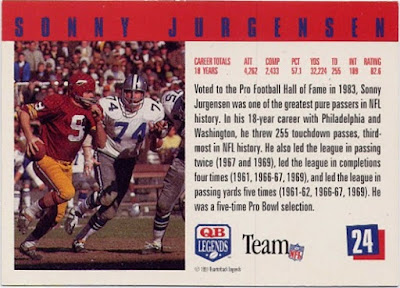 These next two cards I picked to show are of the same Player Jim Lachey. Both are very cool photos the first is a portrait from the 1991 Pro Set Football set, 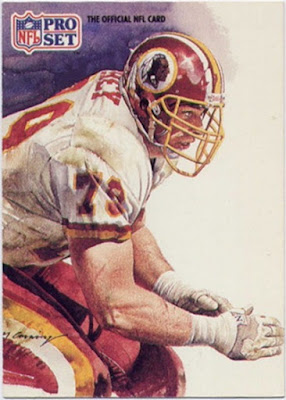 1991 Pro Set Football: 381 Jim Lachey Washington Redskins
Next Card. Check out the cool up close and personal pic. I picked this card to show because of the peeling of the stripe stickers on his helmet. Thought it was very cool looking. 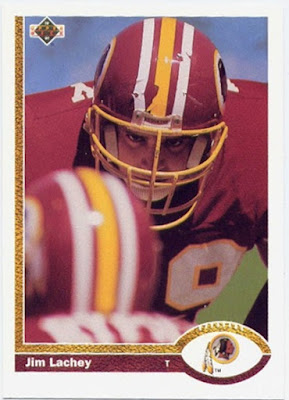 1991 Upper Deck Football - 102 Jim Lachey Washington Redskins
This next card I chose because of the retro looks with the airbrushing/photoshopping (or maybe it is just unbranded spring training gear). It is also close to what the "temporary" helmets of this 2020 season will look like, with the exception that the new temporary helmets will have the player's uniform number in gold on the sides. 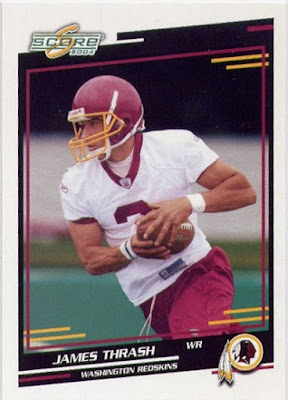 2004 Score Football: 330 James Thrash Washington Redskins
The final card I'm showing is one of the cool retro cards from 2004 Fleer Tradition Football set. Not only is the card design retro but this was the year the Redskins were sporting an anniversary retro uniform with the Arrow Helmet and a retro looking jersey and their return to the mustard colored pants. 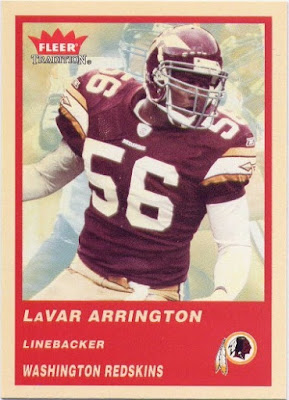 2004 Fleer Tradition Football: 196 LaVar Arrington Washington Redskins
*UGH Due to the recent formatting updating changes that Blogger did, on my ancient computer at home I can no longer edit posts on blogger. It just gave me a blank page, well it had part of the editing "frame" of the page but the part where content was supposed to be it was blank. An incomplete page. I think it is because of something with my outdated Chrome browser. I didn't think about checking with Firefox (or Internet Explorer) until after I had shutdown my ancient Windows XP laptop/notebook. I'll try seeing if my ancient Firefox or IE works sometime later. Probably not because I think they had problems ages ago preventing me from using them then. So I won't be able to directly upload from my laptop to Blogger. I will have to use other sites or do what I did this time and transfer the images to a thumb drive and do it old school. Not to mention I will have to use my work laptop to do all the post editing, not just some of the last minute corrections before the scheduled Noontime posting. Yeah Yeah Yeah I need to get a new up-to-date home 'puter/laptop.
Posted by CaptKirk42 at 12:00 PM