Here is a vintage card that has had a rough life upon the high seas of cardboard collecting. Before I show it here is a brief bit of it's story. I got it at auction from Sportlots for $1.75 plus $2.80 shipping. If the overall poor to good condition wasn't bad enough there was one annoyance that I managed to take care of. It took some patience lots of determination and accepting that there would be a little more damage in the end, but I think I kept the additional damage to a minimum.

I should have taken a "before" scan to show what it was but I didn't. There is still a bit of debris marks in the final scan that shows where it was. For some reason a previous owner of the card, could have been the seller, or an owner before them, had attached some black Velcro, photo album sticker attachment or fuzzy padded non-skid "foot" felt-like thing to the back of the card covering the card number. It was about 1/2" by 3/4" rectangular with rounded corners. Using a hair dryer and tweezers, lots of patience and a whole heck of a lot of determination I managed to get the thing off the card. It wasn't easy and took many short hair dryer sessions and a little minor non-scar finger burning. I also tried using the microwave with short 10 seconds or less sessions but that didn't seem to do anything. With older cards such as this one since there is no foil, or plastic coating that "nuking" the card won't melt or burn or short out your microwave. The idea to get the glue or "gum" hot enough to loosen via a microwave isn't too crazy, but it takes a lot of heat. You need to make sure the card won't get burned or materials in it melt or explode. I was dealing with some paper loss to begin with and trying to pull that sucker off w/out heating the "glue" would have created much more paper loss. Like I said lots and lots of determination and patience.

It was uglier than "Butt-Ugly" and really annoyed me because there had been no mention that any sort of "sticker" was attached to the back of the card in the auction description. As with a majority of  Sportlots listings there we no real mention of the condition of the back. I often just have to take it on faith, that there is little to no paper loss on low conditioned cards. There was no photo of the back either, yes I know that probably should have kept me from bidding on it, but I didn't have a copy of this card and I wanted it because it was a two player card and those can be hard to find sometimes. 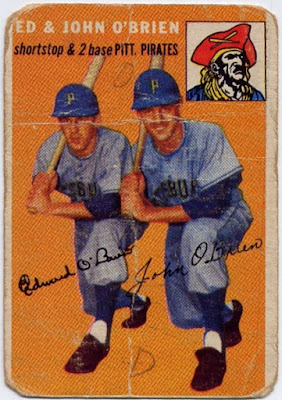 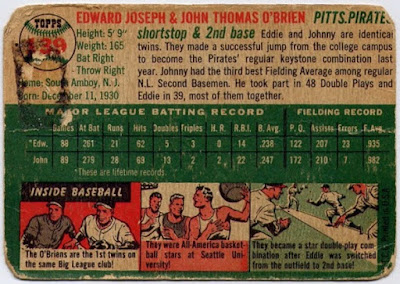 Those black marks on the back just under and partly over the card number on the left is where that "pad" sticker was. Some of the paper there just under the card number and where the baseball "stitching" is is the location of some just hanging on there paper. I could have lost a good portion of the card number and the "Home" and "Born" info if I had tried removing the thing just buy pulling straight off with no attempt at melting the adhesive from the sticker pad.