OK so the title of this post is a little vague but hints somewhat about the player. This is a case of a very well known player who played 99% of his career on one team and then in his final season played for another team before calling it quits. As a result there are no trading cards from his playing days showing him in the second team uniform. It doesn't help that he only started 4 games his final season.

So Who is this mystery player? It is none other than "Broadway" Joe Namath. Who finished off his NFL career playing for the Los Angeles Rams with a wimper. So "Hollywood" Joe wasn't as successful as "Broadway" Joe.

Here is one of the rare cards that shows "Hollywood" Joe in his Rams uniform. It is from the 2011 Panini Gold Standard Football set. The "Black Gold" variant that is serial numbered to only 10. I wish the picture on the front was in color instead of the black and white. I think Panini did that for all the cards in this set. The whole showing "Legends" in glorious Black and White to make them seem more vintage I guess. I probably should try to get the other variants of this card sometime. 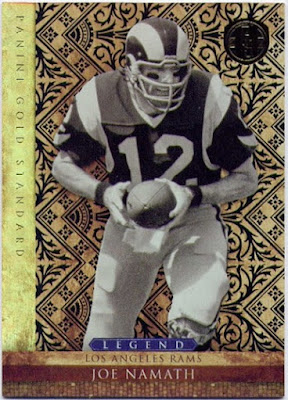 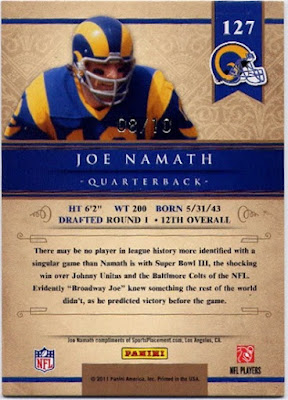