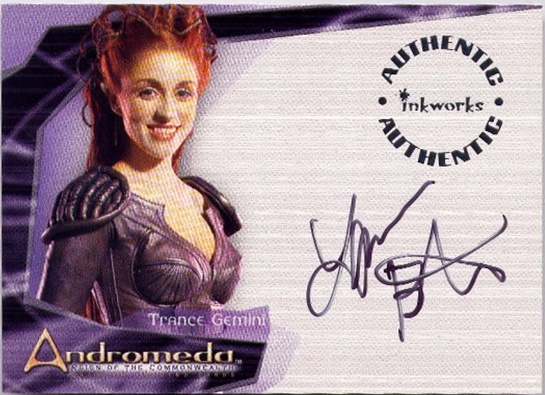 So a couple of weeks back got a second autograph card from an actor from one of the Sci-Fi shows I like. The first one I got ages ago. This is from the show Andromeda. A sci-fi show created by an idea from Star Trek Creator Gene Rodenberry. A few months back I had posted an auto card of the show's star Kevin Sorbo. The cards I am featuring for this post is Laura Bertram who played the alien Trance Gemini.

The first of the two cards I like better even though the signature is not as legible,  and is the one I had gotten a few years back. It was also an oddball type of card as it was originally a sealed "Uncirculated" card, however the gold seal sticker was damaged and was hastily "repaired" with some scotch tape. I don't think I had done that, but maybe. Anyway I probably debated if I should remove and ditch the damaged seal which just adds other problems including not being able to view the entire card. I'm just going to ditch the useless sticker. Maybe back when I got it I thought the seals were cool, but now I don't care. I liked if I could get them, but always hated that they cover up too much info. Also sellers will charge way too much extra for the seal. Anyway that is the older of the two, even though it is from a later series of the cards.

The second more recent acquisition has its own story. I got it from Ebay and even though I paid over $20 ($26 and some change $20 plus postage and tax) the seller sent it by the new Ebay standard envelope. Cards valued over $20 are not supposed to go that way. (update: OK technically my card was just at $20 so it just sneaks by) Which I don't care for. Mostly because the tracking marks the package as "delivered" when it reaches your area's main hub post office, not necessarily your "home" post office that serves your address. I got it a day or two after it was marked as delivered. This has happened with another card I had received via the standard envelope as well. 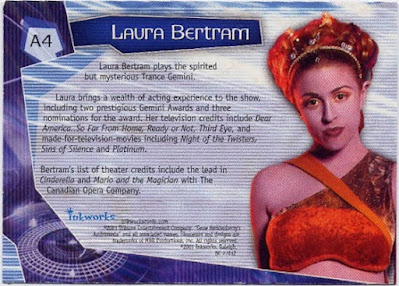 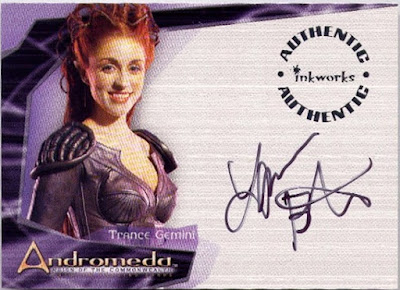 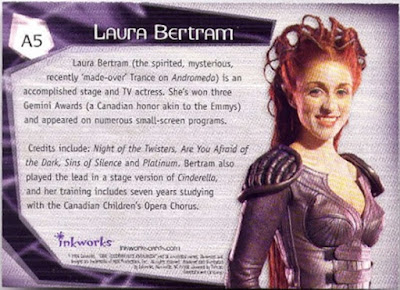