THE CHICKEN﻿
AKA: SAN DIEGO CHICKEN, AKA: THE FAMOUS CHICKEN
(Portrayed by Ted Giannoulas)

Welcome to a new weekly feature "Mascot Monday". Each Monday (hopefully) I will show off a single card of a team mascot and try to give a little information about the Mascot that is featured (if it is the first time I'm showcasing that Mascot and can locate some info on them). I'm not sure how this will go or if I will continue with it, but I will try. 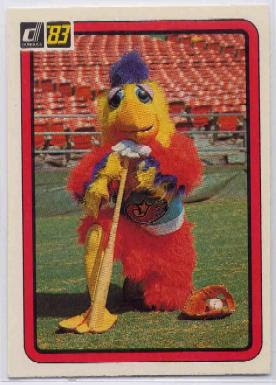 Originally designed as a cartoon for part of an ad campaign for San Diego Radio station KGB-FM The KGB Chicken started making "live" appearances first at an Easter Egg event at the San Diego Zoo sponsored by the station and eventually appearing at sporting events including San Diego Padres games and became widely known as The San Diego Chicken. After a law suit about some conflict between the radio station, and the actor Ted Giannoulas (who portrayed the Chicken), the costume was altered some and Ted was allowed to continue appearing as The Chicken. Now he is known as The Famous Chicken. 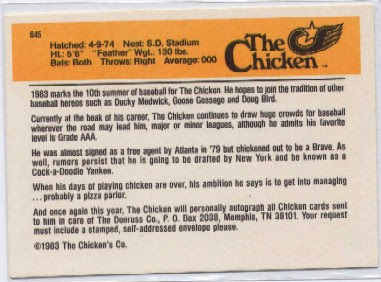 For the December 2002 issue Esquire magazine had an interview with Ted Giannoulas which is a fun read. I had a subscription to the magazine at the time which is the only reason I had even recalled he had been interviewed by them. Warning: Esquire magazine maybe NSFW (Not Suitable For Work)


I am always on the lookout for Mascot cards. So far the only mascot cards I've seen that I am not interested in are some 2012 Upper Deck College Football Mascots Manufactured patches. UGH the photos are THE Manupatches. The card design isn't bad but the patch being the photo or the photo being the patch is the sucky part I hate.  I'll take almost anything other than those. I also accept Mascot Postcards also team issued promo cards/photos of mascots.
Posted by CaptKirk42 at 12:00 PM