The Oriole Bird
(AKA: The Bird, Baltimore Bird, Orioles Bird)


The Orioles Mascot was officially "hatched" on 06 April 1979 at Memorial Stadium. (I guess last week's The Chicken started a trend with the bird like mascots hatching like The Nationals Screech and Lady Gaga.)

Previously a cartoon Oriole bird face (which looks more like a duck) had appeared in the form of shoulder patches on the player's uniforms from 1955 to 1962, not quite a mascot yet but an icon and a logo. Then a variation of the cartoon bird flew into the team's caps from 1966 - 1989 and then returned in 2012. Previous caps and interim caps had a more Ornithologically correct bird. The cap logo I really don't like is the alternate plain "O's" logo.

I could have shown a regular card for the Bird but I decided to show this team issued post card instead. 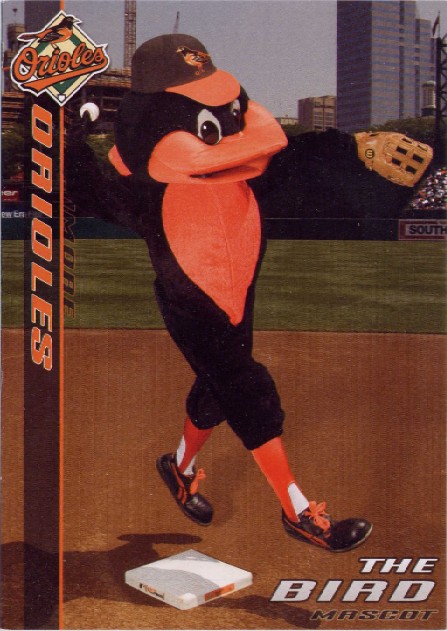 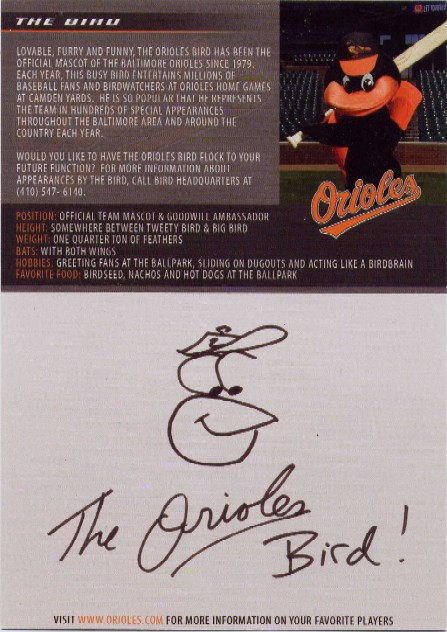 If anyone knows the year this "card" was issued I'd appreciate knowing. Since it has a website on it obviously it is no older than mid 1990s. Judging from the logo on the bird's hat it is from between 1998-2008 probably closer to the later years. The Team logo in the corner seems to be from around that same time too, a similar logo first appeared in 1995 with a plain white dot for an eye. It was redesigned in 1998 and apparently modified yet again in 1999 this logo seems to be the 1999-2008 variation (based on the variation in the tail). I'm pretty sure the autograph comes standard with this card.

I am always on the lookout for Mascot cards. I also accept Mascot Postcards and team issued promo cards/photos of mascots.
Posted by CaptKirk42 at 12:00 PM