Over on my Curly W Cards blog I began a little project that started off by just something I thought would be kind of helpful to some folks who read that blog. It ballooned from that one-shot idea into an even larger project for myself that now spans both blogs. As many readers (The 2 or 3 regular readers) of my blogs may have noticed, or not, I like to make logos for my regular and semi-regular features. The last few times I've made them I decided to do a spread out collection collage of cards that meet the criteria for the feature they are for.

The current logo for this blog is made up of a few of the collages I have made and used for my blogs. I will not attempt to make a key for that one, maybe for the individual collages it is made up. For some of them I might not have some of the cards anymore.

Basically I just spread the cards out covering the entire area of my flatbed scanner and scan the mess. Sometimes I rearrange things or cover up holes if the first attempt wasn't to my satisfaction. Most of the time though it is just a one and done scan. I should have done the logo keys, or key logos when I first did the scanning but I didn't think of doing a post like this back then for any of them. It would have made identifying things much easier. Fortunately most of the time I can recognize what is what.

For these Mascots though it is a good thing I have kept most of my mascot cards lumped together and not sorted into sets yet.

On to the identifying the cards. The team in (parentheses) is the Major League team affiliate at the time of the card. Many of these teams have changed affiliates and several have changed names and moved to different cities completely since the card was printed. It seems that in 2014 there was a major shifting of teams.

Space with unidentified piece of card showing. This little patch around the center in this logo I haven't figured out which card it comes from. The little green area between the Toronto Blue Jays Mascot Ace and The South Bend Silver Hawks Swoop. I thought I knew which one it was (Bubba Grape) but that card is already shown elsewhere in the photo. It looks like an image I seem to recall of a military Minuteman type character in green with purple another card of Louis the Lumberking maybe? I can somewhat remember what the image looks like he is running/jogging the bases or maybe the warning track. A chunk of my mascot cards I can't locate right now it has to be with them.

Very small space with a Topps Opening Day Logo, too small and generic to ever figure out which card it came from. Unless...Hmm the MLB logo is at the top of the Opening Day Logo. That helps narrow it down to a year, dang the picture is too blurry to make out the year looks like 2007 and 2010 are the only years I have that have the MLB logo above and not below the OD Logo...

I think I've narrowed it down to most likely being the 2007 Topps Opening Day Baseball The Bird (Orioles). 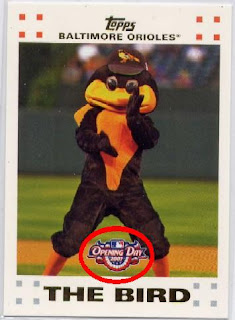 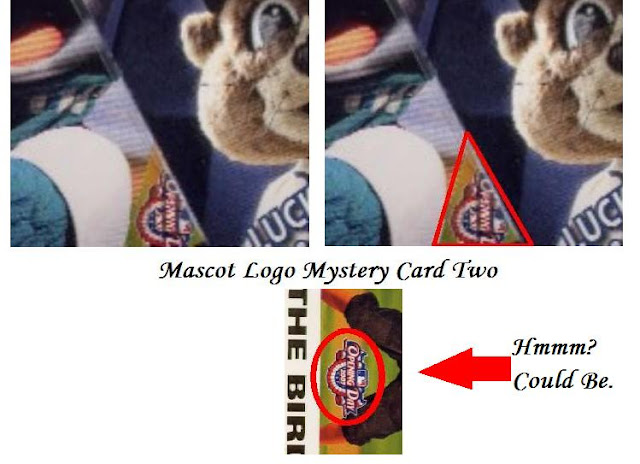 This was also a sneaky way to get myself to scan some mascot cards so I can reboot my Mascot Monday feature.
Posted by CaptKirk42 at 12:00 PM