Blasting The Past: I Wonder Where It Stopped?

So a few years back I had a contest or two just for the fun of it in what I like to call "Random Acts of Cardness". I think most can figure out what that means. On one of those adventures I came up with this interesting piece: 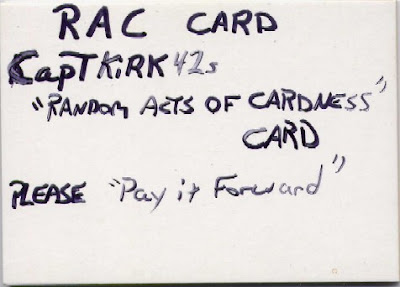 Back of RAC Card 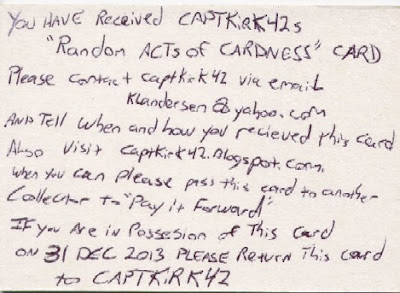 The links at the end of this post give the full story and details, most of which I forget. The basic gist was I held a contest and then sent the winner of the contest some cards along with this homemade RAC (Random Acts of Cardness) Card. My original idea, as it starts to come back to me, was to start the card on a year long journey to as many card collectors as possible then back to me at year's end. Procrastination took hold of me and I didn't send the RAC out until Early Aug 2013. I Tracked it's progress along the way to see how many people had received it. If you remember getting it you're an OLD FART blogger. Kidding. It was only 3 years ago, Oops 4.

I had gotten the idea from some forum posts at TCC Both were a kind of "Pass it on"/"Pay it forward" type of ideas. One was an old site tradition of a wooden coin, or a lucky coin or something. I think it was a homemade thing that was hand-marked "TCC Lucky Coin" or something similar. Not sure cause I never got it. It had an index card that accompanied it on it's travels that the recipients were to write their name and where they were located. The idea of it was if you were lucky enough to get it you passed it on to another member at random. The lucky coin or whatever it was has long stopped somewhere unknown. That is what usually happens with these kind of things.

The other TCC post that prompted the RAC idea was called "The Chain". It was a "pick one card, leave one card" package. It soon morphed into a pick whichever cards you want so long as you replace them with an equal or greater number of cards. That would morph into including larger items and memorabilia at one time, which made future Chain packages have to make rules to limit what could be placed in the package. At one point there was a full 500+ card set, a signed baseball and maybe something else that added to the shipping cost of the package. For later rounds large items and memorabilia were banned from the package(s). The originator would send the package to the first person on the list, that person would choose a card or two, add a card or two equal to or greater than the count of what they took, then pass the package onto the next person on the list and so on. The person at the end of the list would ship the package to the originator of the package. A fun element was when the originator of the package listed the original contents (and possibly provided a picture or scans of the cards), and then by the time it got back to the originator what cards were in the final package.

As you can see from the tracking info below, it went halfway across the good old USofA, took a late summer vacation in Portugal (to see all the lovely lady cards I bet) back to the States and then in late December around Christmas time disappeared somewhere in the back alleys of Illinois. It may have made it out of that state, but me thinks it crossed da family somehow and is now swimmin' whit da fishes.

Here is how the unskilled trackers at CK42HQ shadowed shadowfly  followed The RACs journey:

Didn't reach Final Destination: Silver Spring, MD back at the end of 2013.

Does anyone know where the RAC Currently is?

Anyway there have been times I've thought of sending another of these things around. Maybe this time I won't ask for it to be returned just that it gets PAID FORWARD to other collectors and update me with a heads up to its current location from time to time?

Guess I should show a card maybe two. OK maybe just one quick Card of the Whenever.

This card I have mentioned the cards I had gotten the same day as this one on 04 April 2017 my birthday in fact. At first I thought it was the same package but I double checked my mail day "blogs" and it was in a package by itself. I had to battle a little for it. It was from an Auction at Sportlots got it for $1.25 with $2.25 shipping. 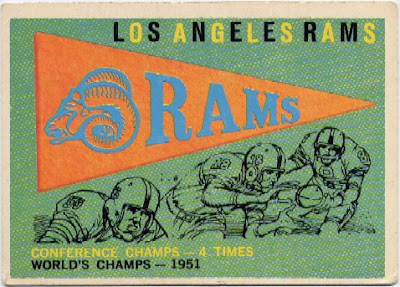 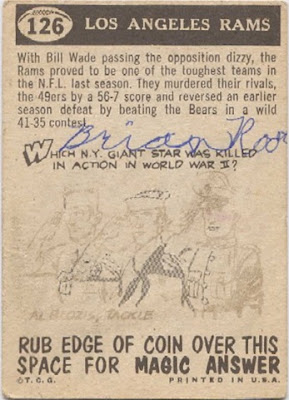