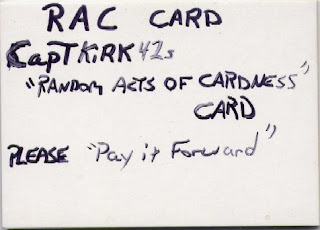 Monday 23 December 2013: Jeff of 2x3 Heroes received the RAC card via Jim (GCRL) sounds like it was a drive by, I mean in person pass off. As the year is winding down there might be one more pass off not sure since the year end holidays are upon us.

Friday 13 December, 2013:
Just got an email from Jim at gcrl saying he had received the card via Nick's Dime Box. Man I so wish I had started this thing closer to the beginning of the year, things seem to be picking up steam.

Thursday 07 November, 2013:
WooWhoo! The RAC Card seems to be taking a winter holiday in Europe. I got an email from Ana Lu of the Hobby Cards Europe blog. She lives in Lisbon, Portugal the RAC Card made its way to her via Commishbob. Thank you Ana for the update and thank you Bob for paying it forward overseas.

Monday 05 August, 2013:
Finally I got this into the mail this past Saturday (03 August 2013) heading to the winner of my RAC2 Contest Commishbob. Yes I was procrastinating some, I procrastinate in just about everything dealing with cards for some unknown reason. I sent him some cards that he should be receiving/has received today according to USPS Package Tracking Service (was "Delivery Confirmation"). There was nothing too spectacular some vintage and some newer Orioles cards. Hopefully there are at least one or two cards he didn't already have. Hopefully he can Pay Forward the RAC Card to someone soon, and I'll hear from that person about the card status.

I originally thought I would be on top of things and have almost a year for this "Pay It Forward" RAC Card experiment, but with all my dilly and dallying it will only be a little more than 4 months.Hopefully those who receive the card will follow the instructions and keep me updated when they receive the card, and it will be returned to me sometime in January. I'm not expecting to have any cards come with it, but who knows there might be some.

I will keep track of where the card has been. The only mention of "who" has it will be int my updates above. If given the sending dates I'll include those below, if not the dates will just be date received. 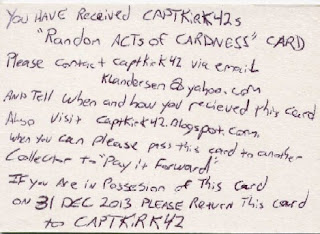