A Kirk Of A Different Color

In recent years I really haven't been too big on Chrome cards and even less thrilled about the Refractors which are Chrome cards on steroids. Back in the 1980s or late 1970s when the companies were experimenting with Chrome and Hologram cards I thought they were pretty cool, that was until they started overdoing them like everything else in the "Junk Wax Years". I do have a thing for parallel cards and variants. These days it seems the card companies are cranking out more parallels that are only slightly parallel rather than true variants, and very little base. Sometimes it is hard to tell what exactly is different. OH the background is light tan instead of light gray, Ah his name is in silver leaf instead of gold leaf, took me 10 minutes to figure that one out.

Well I saw a parallel chrome refractor on auction at sportlots.com that was a beaut. Fortunately it is even more of a beaut in real-life.

Here are the details: As I said, and as you can see by the logo at the top of this post, I got it from sportlots.com via their 1...2...3...Auctions. I got it for the opening .25¢ bid + $1.95 shipping. The shipping charges were about right for how it was sent. Not like those slime balls who charge $3.00+ for shipping and then send in a PWE with only a stupid "card saver" to supposedly protect the card. This one was in a medium sized, medium cardboard stock envelope/packet about the size of a medium wedding invitation or birthday card. The card appropriately in a penny sleeve in toploader. The order/packing slip was wrapped around the card. The card is 2012 Bowman Baseball Chrome 24 Kirk Nieuwenhuis RC Mets Purple Parallel #045/199. As I said sweet very sweet looking. Here take a gander at it. 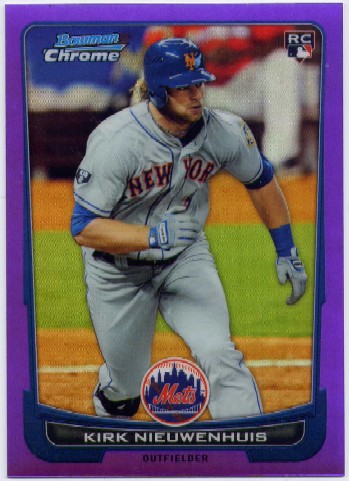 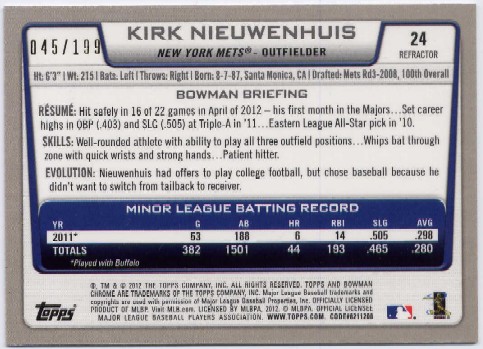 I guess I probably should get the flagship Bowman base and the base Chrome of this card, maybe go for a master rainbow of it. I am warming up a little to chrome and refractors, even a little to the Game Used cards. I still hate the game used and artifact cards concept of cutting up memorabilia into tiny little inch squares, but am starting to appreciate them a little more than I once did.
Posted by CaptKirk42 at 12:00 PM