23 August 2013:
It is NFL Hall of Famer Sonny Jurgensen's 79th birthday. Happy Birthday Sonny! Here is what was on Facebook this morning on the Redskins Page:
Another birthday mention is on the blog "Can't Have Too Many Cards" with some cool Sonny pics, some of which I hadn't seen before.

Sonny J. is one of my All-Time favorite QBs if not my favorite. He is best remembered as a Redskin, but he started his NFL career in Philadelphia with the Eagles. 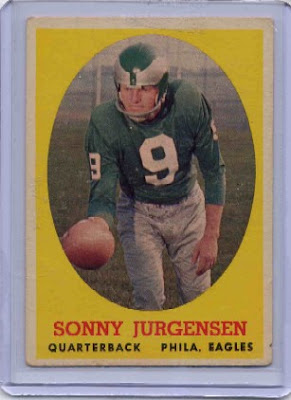 In 1964 Sonny was traded to the Skins in a trade that involved QB Norm Snead. That meant that a few of his late 1960s trading cards even though they were labeled as him being on the Skins, used  an old photo of him in his green Eagles jersey. 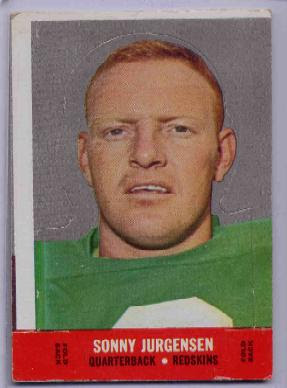 A couple of my fave Sonny cards I have scanned. There are a few more in my Sonny PC but I don't have them scanned or at least don't have the scanned images online anywhere yet. 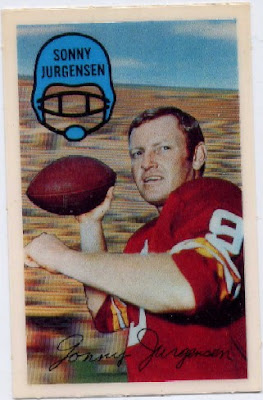 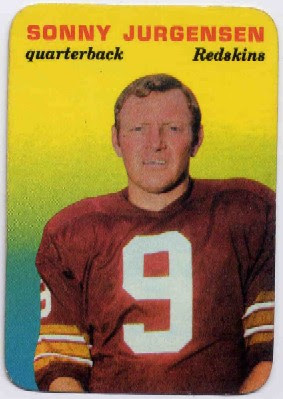 OK this last pic is not a card but it is cool memorabilia. In 1971 (and '72) The Mattel Toy company made little battery operated "toy" record players with 2.5" discs of the popular sports figures of the day. Called Instant Replay I got this Sonny Jurgensen one off of Ebay for $6.99 + $2.00 shipping. 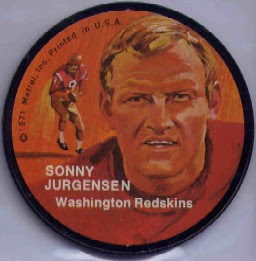 Happy BirthdayGood old number Nine, I'm not sure why the Redskins have not retired his number yet. They should before some hotshot kid claims it and has a terrible career while wearing it, or someone from another team that wears the number like Mr. Romo gets traded to the Skins. Oh I did a quick Google and technically not retired, The Redskins have a sort of non-retirement policy, his number along with several other Redskins legends like John Riggins are "Unofficially" retired.
Posted by CaptKirk42 at 4:49 PM