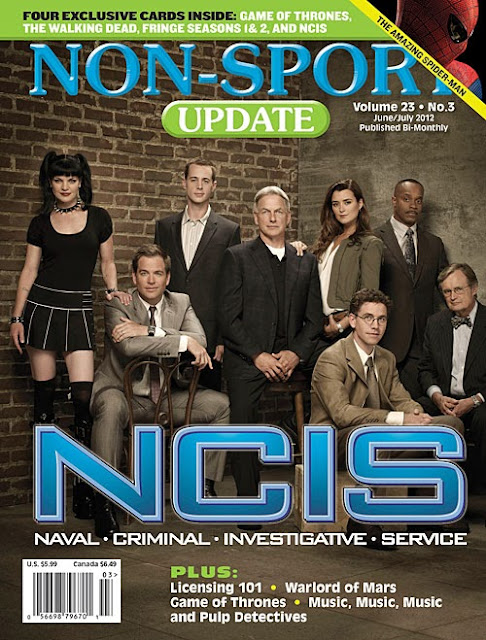 I have so many things that I want to blog about but have not gotten around to scanning or I had gotten so long ago I don't remember where I got them or how much I paid for them. So sometimes I won't bother with all that. This item is something I got recently enough that I could still find it in my card forum blog entries without any problems. Now the details for this are as follows: From Ebay I got a fresh unopened copy of Non-Sport Update Magazine Vol 23 No 3 with NCIS Cast on cover for $5.99 + $2.75 shipping it was sealed with the following promo cards:
2012 Rittenhouse NCIS P2
2012 Cryptozoic The Walking Dead P2
2012 Cryptozoic Fringe P1
2012 Rittenhouse Game of Thrones Season One P2

Obviously from the cover I got this issue for the NCIS info since I'm a huge fan of that show. For those not familiar with the magazine it is a bi-monthly (meaning it comes out every other month so only 6 issues a year). It gives the latest info on upcoming Non-Sport Card releases and also includes a semi current price guide. Each issue also has a handful of promo cards, usually four.

Of the other three promo cards, two of them I am going to either trade or sell because I'm not interested in those card sets or the series they are based on. Those two are The Walking Dead and Game of Thrones Season One (I also have the NSU P2 promo card of Game of Thrones Season Two). I am undecided on the Fringe card I think I'll keep that one. I'm not sure which hoarding stack that card is in right now anyway.

As for NCIS well there are three other promo cards for that series  as well as the base cards which cover the first 72 episodes of the series or the first three seasons. I also plan on getting the Autograph cards from the series as well. Those who are familiar with the show know that it is a spin-off of the series J.A.G. (Judge Advocate General) I have the base card set for that one, but need to search for the Autos and any fun inserts. I need to research that set again and blog about the base set sometime. Just one of many many things to blog about eventually.

The NCIS series is made by Rittenhouse, which is the top player in Non-Sport cards now-a-days. 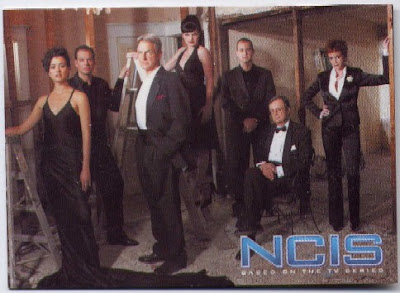 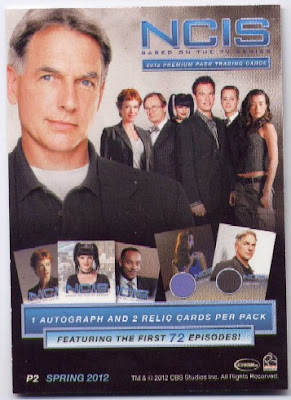