Looking For A Few Clues About These Cards.
Updated 14 May 2015

Every once in a while a collector will come across something that they have never seen before and is unfamiliar to them. While most times these small mysteries can be solved with just a little research, which now-a-days only takes a few seconds for a Google search, sometimes the expert panel of judges gets totally stumped. This page will be for those things in my collection I am totally stumped on, or I need more info on. I will have a similar page called Mystery To Me on my Curly W Cards blog for Senators/Nationals Mystery Cards/Memorabilia. To be honest is was because of a Senators card (sticker actually) that I was having problems identifying that I decided to start up the Curly W Cards page. I have actually figured that one out before I have posted/published either of these mystery pages.

First Mystery Card:
I have posted about this card and the mystery of it's origins before.

All I know is it is from around the mid-1990s as it mentions her "baby boy" Erik born in 1994. She also has two daughters born in 1998, and 2003. So this narrows down the year to 1994 or 95 any later and Erik couldn't accurately be described as a baby anymore. It mentions her guest appearances on Melrose Place which she did in 1994. Even though Kathy was a model for a long time the photo looks like it was from her early years of modeling when she was still in her teens. Her hair isn't overly styled and her makeup looks real simple not necessarily made up for a photo shoot. I had gotten the card from Ebay circa 2008 for $10 or less. The frustrating thing is that Ebay auction was the only place I had seen this card. At the time the image looked very familiar as if it was a pose that had appeared in a few magazines, but I haven't found it anywhere. Searches have come up empty or just my original posting of when I got the card. 1994-95 was right smack dab in the center of the Broder card (Unlicensed card) era which was a huge part of the Junk Wax Years. I am about 90% sure it is one of those things so I might never know exactly who made the thing.

Update: 11 May 2015: Saw something that had a link to Tin Eye a photo recognition website and it found a match for a poster up for sale on Ebay. 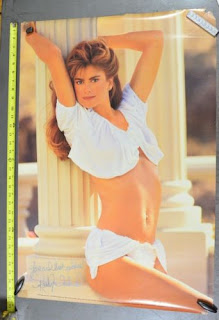 Still doesn't help in my quest.

Next Mystery Card:
OK this one is a semi mystery. I realize it is a counterfeit RC of the 1951 Bowman Willie Mays card that I blogged about years ago. I'm guessing it was done during the 1980s sometime around the beginning of the junk wax years. It isn't one of those official reprints since there is no marks saying it is a reprint. I have looked at it carefully and some of the "ingrained dirt" looks to be printed on there. As I mentioned in my earlier post on it the seller stated in the listing (eek I actually spent $5 more than I should have on it, unless that was an estimation based on vague memory) that he didn't know if it was an original vintage or a newer reprint. I hoped upon hope that it was REAL but as I said some of the ground in "dirt" appears to be ink or paint. Again another of these cards I may never know the true origins of. 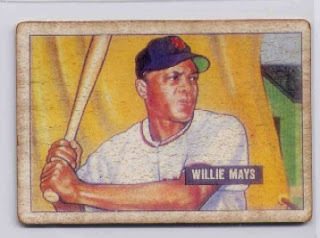 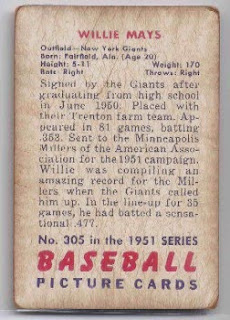 Next Mystery Card: (well sticker really)
This is a really cool sticker from the Baltimore Orioles. I think it may be team issued. I narrowed down to sometime during the 1990s due to the bird design and its characteristics. The back is plain white sticker paper. As I go back and forth between updating this page and my original posting of it, I think it may be decals for some kind of toy, but probably not. Most likely it is from one of those retail packs of stickers for greeting card stores, general stores like K-Mart, Ben Franklin's or toy stores.

Next Mystery Card:
This card is a post card of The Oriole Bird that was my second Mascot Monday card I featured. I'm trying to track down the date of it. It is pretty obviously a team issued thing to be sent in team promo packages or given away at team sponsored events. The team logo used narrows it down to the 1990s sometime plus the fact that there is a website listed means it could not be older than early 1990s. My original estimation is between 1999 and 2008 When the logo design was used.