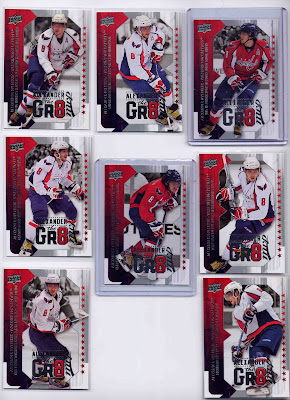 For their 2008-08 Hockey MVP set Upper Deck produced an eight card subset honoring the career of current great Alexander Ovechkin (Washington Capitals). Eight cards is logical in a couple of ways. First Ovechkin's jersey number is 8. Second the subset title "Alexander The GR8" plays with the Historical Greek King and the awesomeness of Ovechkin's hockey career.
Each of the eight cards has an action picture of Alex on the front with his name and Washington Capitals on the left edge, under his name is a highlight of his career. 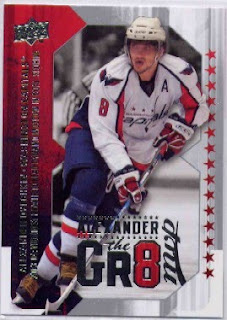 2008-09 UD Hockey MVP #AO1
On the back there is a brief paragraph that gives more detail of the highlight that is on the front of the card and a black and white headshot of Alex. Each headshot is different. 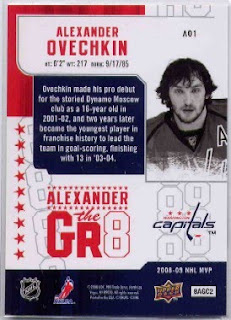 2008-09 UD Hockey MVP #AO1 (Back)
The set is not all that rare and I imagine it only really appeals to Capital's fans, and completists who are building that Master set of 2008-09 Upper Deck Hockey MVP. 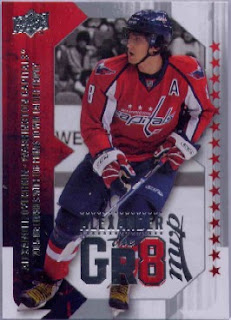 While I was building this little subset, I noticed I had misplaced card #3 from the set (#AO3). I searched high and low for it and couldn't find it. I looked everywhere I knew I had hockey cards. Especially the other cards from this set I had (at the time I only had 3 or 4) and hockey cards I knew I had gotten around the same time. Well I couldn't find it so I ordered another copy of it from sportlots.com The replacement card three was the last card I finally received from the subset. Even after having the complete set I couldn't find the original #3. 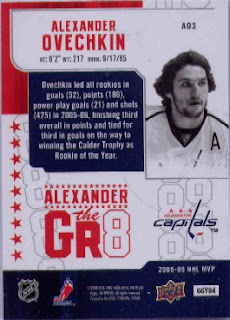 2008-09 UD Hockey MVP #AO3 (Back)
Well I finally found my original card #3 of this subset. Wouldn't you know it I finally found it while searching for something else. What had happened was the penny sleeve I had it in got stuck to the penny sleeve of the card above it in the pile and then the box that I had them in. I had searched that stack of cards before and had seen the card before it several times. Only this time when I was checking the backs I recognized the back. Mystery solved.

So now I have an extra one of these cards to trade for either another Alex O card or some other hockey card or any similar card really. 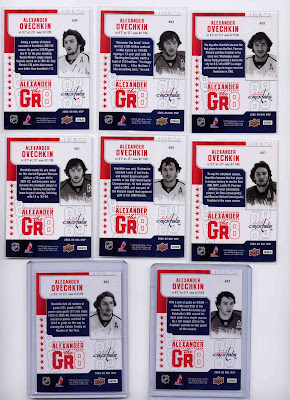