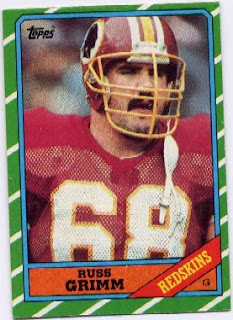 Most sports/card bloggers when mentioning the NFL 2010 Hall Of Fame Class are touting the glamourized players Emmit Smith and Jerry Rice. but hardly if ever mention Russ Grimm or any of the other 4 players (Ricky Jackson, Dick LeBeau,Floyd Little and John Randle) that are part of the 7 man class for 2010.

For those who don't remember or choose to ignore him Russ Grimm was a Guard on the Washington Redskins. He was part of the Offensive line that was nicknamed "The Hogs" back in the 1980s (OK so these bloggers are too young to remember him or any of the other Hogs) He was a tough guy and often played with injuries. He was a 4 time Pro Bowler (OK so that isn't too exciting but it's big for a career) part of the 1980s All-Decade Team and in the 70 Greatest Redskins list. So no love because he played for the Redskins during 4 of their Super Bowl appearances of which they won 3. 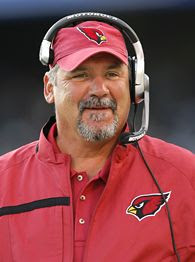 OH he is currently the assistant head coach and offensive line coach for the Arizona Cardinals. He's been with them since 2007 you might have seen him on the sidelines during the playoffs this year or perhaps last year at the Super Bowl.

Now I didn't really pay attention to see if those people were Super Cowboy fans or 49ers fans, but they did seem to ignore anybody who wasn't Mr. Super-Duper Smith or Rice. Now the only name I didn't really recognize from the class, either from memory of hearing their names during games, or from my football card collection was Ricky Jackson. Not a real surprise considering most of his career he played the unglamourous position of linebacker for the New Orleans Saints - Hey they just won the Super Bowl FOLKS!

Dick LeBeau I guess was better known for being the Steelers Defensive Coordinator, I had heard of him from having a card of two of his from the early '70s as a cornerback for the Lions.

Floyd Little who was a Running Back (one of the 3 glamour positions RB, Wide Receiver and Quarterback) for the Broncos Hmm he was the first running back to win an NFL rushing title on a last-place team (1,133 yards, 1971) Umm OK that's why people don't mention him I guess.

John Randle was a defensive tackle for the Vikings lets see he earned seven Pro Bowl selections and was named All-Pro six times, and was named to the NFL's All-Decade Team for the 1990s.

Not to shabby. Then why do most of these bloggers are ignoring these guys?

So as a Redskins fan I will ignor Mr. Cowboy Smith star running back and Mr. wide receiving 49ers Rice LOL. 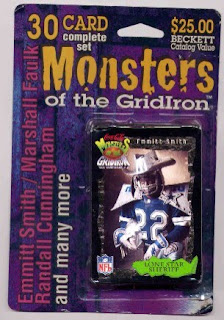 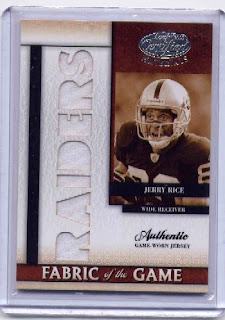 Hey Jerry also played for the Raiders amazing.
Posted by CaptKirk42 at 12:00 AM