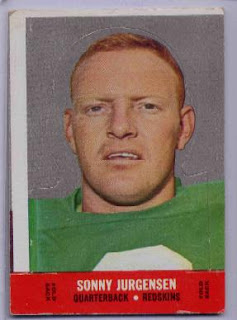 In the 1960s and 1970s Topps used to have some interesting and fun extras inserted into their card packs. 1968 was no exception for the Football series. In addition to the regular cards for 1968 Topps made a series of "Stand-Ups" for their football series that are similar to the 1964 baseball standups. These cards are perforated, or "cut out" so that you can punch out the outer edge of the card and with a couple folds stand-up your cards. Each card has a head and shoulders head shot of the player so in their "stood up" mode they would look like busts. The baseball cards from '64 on the other hand had the players in action poses so the baseball ones would appear to be playing if you had enough of them spread out.

I recall as a kid I had some of these, and maybe one or two of the baseball, of course being a kid I had punched them out and played with them. I don't recall which ones I had or how many. It has been ages since I've had any of my originals. Thanks to ebay I managed to find a few in decent shape and uncut. I just have four and each one seems to have some centering issues. If they were punched out it wouldn't be as obvious on a couple of them.

As with many cards in the 1960s and 1970s Topps often used the same photograph of a player multiple years. For some reason they seemed to use an old pic of Sonny Jurgensen in his Green Philadelphia Eagles jersey, so that photo has to be from 1963 at the latest. Also Billy Kilmer is shown in a Red jersey (he was previously on the 49ers till 1966) but was a Saint at the time these cards were released. 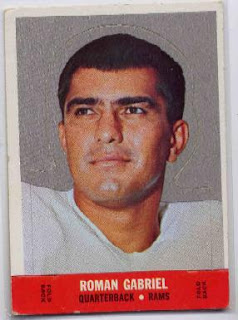 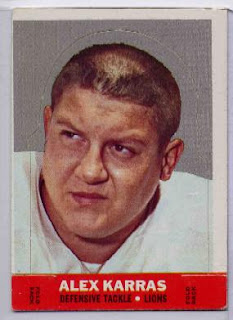 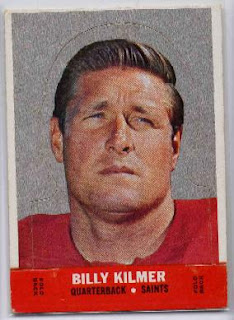 I prefer unpunched cards, but to fill-in gaps in the set I'll accept better conditioned "punched out" ones. To have my set complete they all must be unpunched.
Posted by CaptKirk42 at 2:20 AM