This Monday we feature the mascot of the Arizona Diamondbacks D. Baxter The Bobcat. Baxter became the mascot on 23 June, 2000. The explanation of his name is a bit corny but it is a fun story. Besides having a bobcat as a mascot is more fun than having a snake as a mascot. There is a minor league team that has a mascot named "fangs" which is a typical mascot with a funny head his funny head happens to be a snake head. Anyway the story goes something like this. Baxter got his name from Brantley Bell the son of original D-Backs player Jay Bell who played on the Diamondbacks from their inaugural season 1998 to 2002. The team's nickname is the "D-Backs" (D. Baxter) and before the team's stadium was called "Chase Field" it was "Bank One Ballpark" nicknamed "Bob" (Bob as in Bobcat). OK a ballpark nicknamed Bob lets just show Baxter's card. 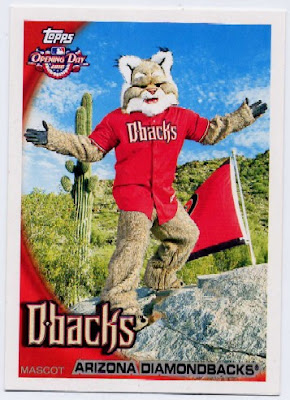 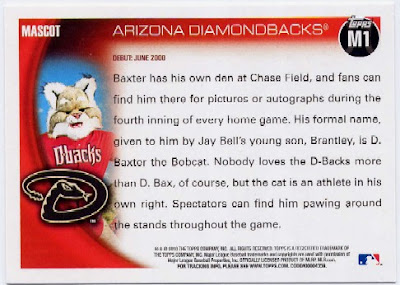