This Monday's Mascot is the Proud American Eagle Slapshot official mascot of the NHL
Hockey Team Washington Capitals. Slapshot was born on 20 June 1782, and made his mascot debut for the Caps 11 November 1995. Before being a sports mascot he was the model and original star for the Great Seal of the United States.

The card I am showing was one I recently got from David a reader of my blog, I'm not sure if he has his own blog or website but he is a fellow collector of Mascot stuff. He emailed me asking if I wanted some Mascot stuff for FREE (with nothing needed in return) he was thinning out his fat Mascots binder of duplicates and offered to send them. I accepted and got a great stack of Mascot stuff, mostly cards, postcards and larger pictures and flyers with a few team schedules. Some of the things were team issued exclusive fan club stuff others like this card were more generic and more widely distributed. Another Cool Random Act of Cardness from a collector in the blogiverse.

Here is this week's Mascot Card: 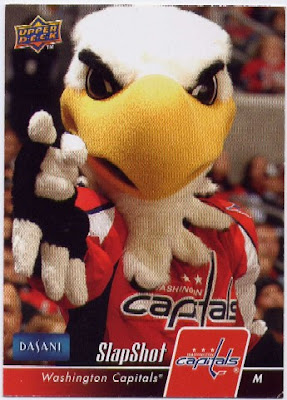 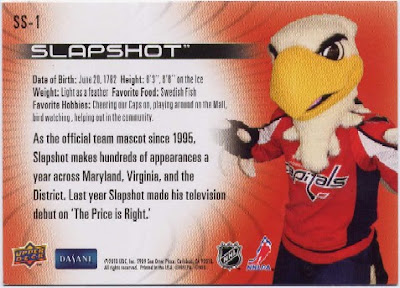