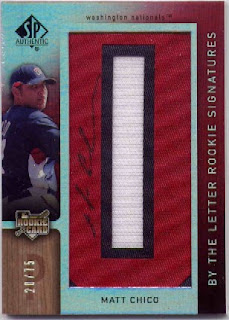 In my mailday for today Friday 05 March, 2010. I got the Australian Gladiators cards for my PC I mentioned in a previous post from Ebay.

Then from a trader at SCF (sportscardforum.com) I bought some cards of my fave teams he wanted to get rid of. I didn't really want most of them but I thought what the heck he wanted them gone and he was only asking $13 for 6 cards. I can think of some people who might appreciate them. He was nice and added 3 more cards.

The lot included that 2007 SP Authentic "By The Letter Rookie Signatures" Matt Chico (Nationals) "O" card. His signature is on the left side of the "O". I am still not sure why I got these I hate these letterman things and this is the first and hopefully the very last one I will ever ever get. I does look nice, but I don't like these things, and I got the dang thing on purpose. Curses.

The other cards in the lot include: This Koji Uehara 2009 Topps Chrome card below (again I don't like chrome): 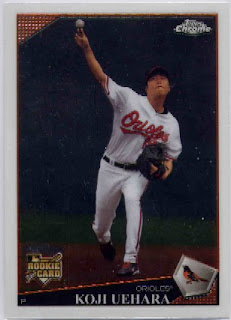 FOOTBALL: (All Redskins - The Malcolm Kelly's were the reason I bought them in the first place. I'm not sure if they will stay PC)

All these baseball and football cards are For Trade.