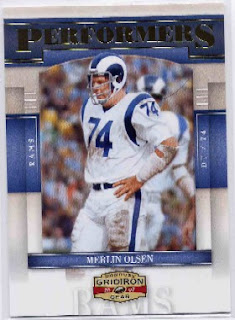 Today is a sad day for Rams fans. HOFer Merlin Olsen (Age 69) passed away due to mesothelioma, a rare form of cancer often related to exposure to asbestos. He played with the Los Angeles Rams from 1962 - 1976 he was enshrined into the National Football League's Hall of Fame in 1982. 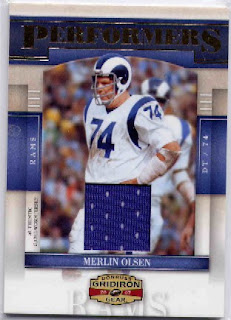 Olsen played left tackle in the Rams' legendary front four nicknamed "The Fearsome Foursome", with David "Deacon" Jones at left end, Roosevelt "Rosey" Grier at right tackle and Lamar Lundy at right end. Jones, who lined up to Mr. Olsen's left, coined the term "sack" to describe tackling the opposing quarterback behind the line of scrimmage. Olsen is the second member of the Fearsome Foursome to pass away, Lundy passed away on February 24 2007 at the age of 71. 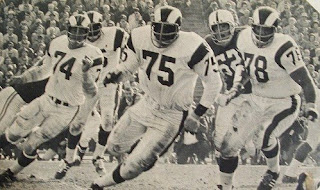 Merlin Olsen, Lamar Lundry, Deacon Jones, (Glenn Ressler B'more Colts), Roger Brown (Misidentified as Rosey Grier from the source I got the pic from)
Merlin was also known for his acting in television roles for "Little House on The Prairie" and "Father Murphy" . Teammate Lundy also did some acting he portrayed the boulder-hurling cyclops in the (previously) unaired pilot of Lost in Space (this pilot was later made into episode 4 of the series, entitled "There Were Giants in the Earth"). 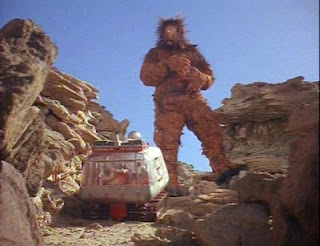