From a fellow member on one of the card forum sites I discovered a short while ago (Card Collectors World), I bought a couple of Non-Sport Auto cards made by Inkworks. The Rolls Royce of Auto Cards. I've wanted to get some Inkworks autos for some time from various sets. They were either too darn expensive, or they were GU/Auto cards, or the signature looked awful. I finally decided to bite the bullet on a couple. Actually the prices weren't too bad, averages $10 a piece.

So here are the two beauties, with a couple of beauties on them. 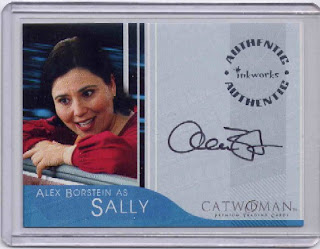 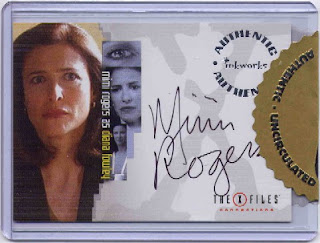 The X-Files one is an "uncirculated" card with a huge gold seal keeping the toploader sealed. Now that is fine and dandy and 10-out-of-10 for style for being super duper Mint condition, but minus several million for covering up part of the signature. Fortunately this card only the end "s" in Rogers is partly covered. I've seen other signatures where most of the signature is covered over. It also covers over most of the info on the back that describes the character or some of the actresses previous work. I may have to break the seal on it and live with an uncirculated card being tainted by having it's gold seal broken.
Posted by CaptKirk42 at 7:00 PM