Billy The Marlin made his MLB debut on 25 February 1993. For details of his history see his Wikipedia page. I have chosen his 2007 Topps Opening Day card to highlight. This particular set was the first time I know about Topps showcasing most of the current MLB Mascots. For many of the loveable foam headed creatures it is their Rookie Card outside of any team issued sets the mascots may have been a part of. The Mascot cards were part of the regular set near the end of the set but not grouped all together. In fact I think a few cards that were originally listed were never made and replaced by a player. In later years Topps would include the Mascots in the Opening Day set as a sub-set if they included the mascots at all.

Billy Marlin's card was the second Mascot card I got from this set, my Homie Mascot Screech (Nationals) was my first card. It took me a while to get the rest of the Mascots from 2007 because they are spread out so toward the end of the set, not grouped together. 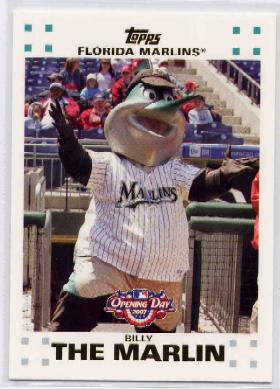 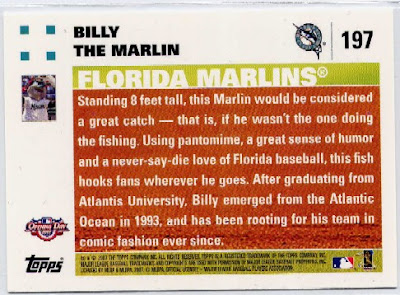