For this week I decided to post my first Minor League Baseball mascot card. I got this one some months back (January?) from Ebay, I think I paid $5.00 for it. It was my first MILB Mascot card (I have a ton on order so soon it will not be my only one). Anyway before I show the mascot card here is the most brief info of the Team the mascot comes from:

Mahoning Valley Scrappers Niles, Ohio - New York-Penn League - Pinckney Division. The Scrappers were founded in 1999 and have been affiliated with the Cleveland Indians the entire time. All I know about the team is what I have found on wikipedia and on the Team Website. They have done OK in their history. They have won their division and gone to the Post-Season four times in 1999, 2000, 2004 and 2009, winning the League Championship in 2004. Their mascot is a bulldog named Scrappy. Here is his 2009 card. 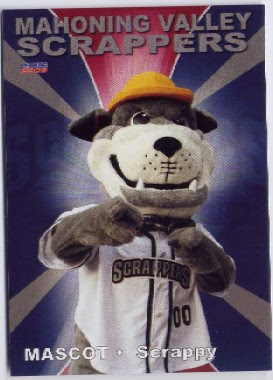 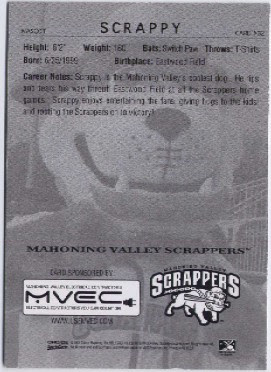 I like the design of this card, I am almost tempted to try to find the rest of the Scrappers or at least all the mascots from this set. I also like the background photo on the backside of the card.