OK so in 1977 MLB started up two expansion teams the Seattle Mariners and the Toronto Blue Jays. The Blue Jays became the second team from Canada in the league. Since the Montreal Expos left the country to become the Washington Nationals in 2005 the Blue Jays are now the ONLY Canadian team in baseball's Major League. In 1979 University of Toronto student Kevin Shanahan made his debut as BJ Birdy The Toronto Blue Jays mascot on 11 September. For a full bio/history see The Wikipedia page for the Blue Jays Mascots.

For this installment of Mascot Monday I have decided to show BJ's card from the 1993 Upper Deck Mascot Madness mini-set a five card set of popular MLB Mascots. The big "WOW Factor" of the set is the holographic picture on the front. I will show off that set on this blog sometime in the future. 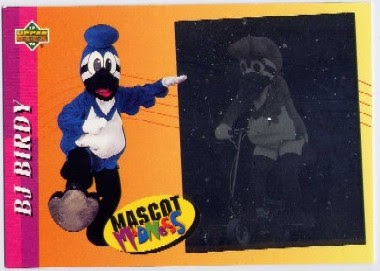 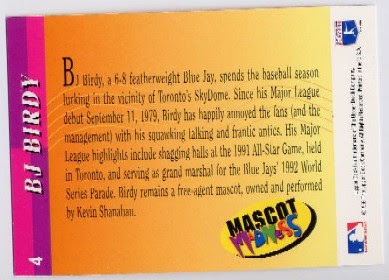 On the front image that white spot on the hologram in the center is unfortunately a spot where the silvery material for the holographic image has flaked off. The design of the set has the mascots in front of a star filled background I guess to help with the holographic effect.


I am always on the lookout for Mascot cards. I also accept Mascot Postcards and team issued promo cards/photos of mascots.