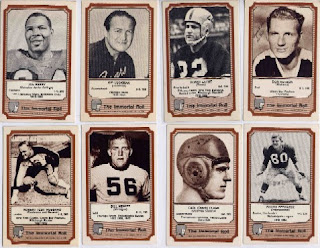 In 1974 Fleer produced a Hall of Fame "The Immortal Roll" set of 50 NFL cards similar to the Baseball "Pioneers of Baseball" 28 card set. These cards were packaged I think 4 to a pack with a team logo sticker or cloth sticker. This set and the baseball one were my first "retro" cards of hard to find old-timers or Hall of Famers from any sport. At the time I was not really into reprints, still not, or retro cards, but these sets just reached out to me. I've liked them ever since. This set was so successful that in 1975 Fleer produced an 84 card set that is very similar and sometimes gets confused with this one. The main difference is the '75 set has brown borders instead of the white, and they are numbered. This '74 set is not numbered and often any numbers assigned are from their alphabetical ordered position. I think for the '75 set they just used the same photos, which adds to the confusion. The backs have a drawing of the Hall of Fame building in Canton, OH an a descriptive paragraph of the player featured. 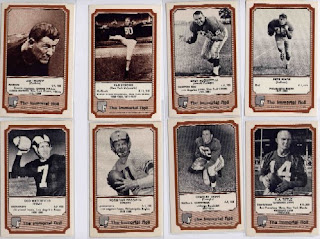 I really dig the old leather helmets and the early metal ones.

Check out the poses. 3 Point stand w/out helmet?

Don't forget the "tough guy" and the "pretty boy". (OK I got a little carried away there.)

I only have the 17 different cards featured in this post a few of them I have duplicates. I plan on getting the rest of this set and the 1975 set.
Posted by CaptKirk42 at 7:00 PM