First produced in 1971 for the Upcoming 1972 Election year. This card 54 playing card deck was made by a card publishing company known only as "Politicards" (on the side of the box). Each card including the two jokers has a cartoon caricature of a political personality from that period of time. Plus a few from a few years before. To the best of my knowledge this is the first time this was done specifically for an election year. It seems to have been done every four years since.
In 1972 my family had a deck of these cards that we played with and like all the other decks of cards we had eventually the cards got lost in our basement. I seem to recall a few years later seeing some similar cards with Jimmy Carter so I'm fairly sure the tradition has been kept up every four years using the current political figures of the time. It is a fun way to see who was in on the political scene in America at the time the cards were produced.
The first deck made in '71 had a simple design for the card backs. A gray background with the four card suits in a red, white and blue stars and stripes flag design. The box was simply a plain box with an outer sleeve that slides open to get access to the cards. The front of the box shows Richard "Tricky Dickey" Nixon as the King of Spades, the back of the box is the design for the back of the cards.
1972 Politicards box back (open) 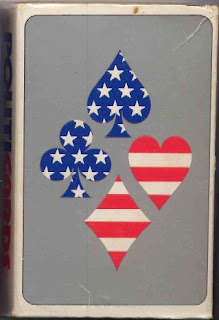 Richard Nixon is the King of Spades 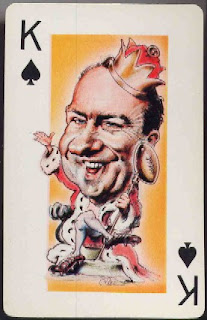 Eventually I will scan the individual cards and show them, but for now all I have scanned are the boxes from each of the years I have. 1972, 1996 (Red and Blue versions), 2000 Red Deck, 2004 Blue Deck, 2008 Red and Blue Decks. These cards show up on Ebay from time to time. Most of them are fairly reasonable price-wise. I've only seen one of the decks with Jimmy Carter from 1980? once and it was too expensive to even consider trying to get. In the meantime I'm going to try to fill in the gaps I need, even getting the red or blue versions I still need.